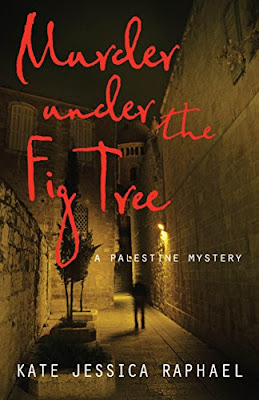 Hamas has taken power in Palestine, and the Israeli government is rounding up threats. When Palestinian policewoman Rania Bakara finds herself thrown in prison, though she has never been part of Hamas, her friend Chloe flies in from San Francisco to get her out. Chloe begs an Israeli policeman named Benny for help—and Benny offers Rania a way out: investigate the death of a young man in a village near her own. The young man’s neighbors believe the Israeli army killed him; Benny believes his death might not have been so honorable.

Initially, Rania refuses; she has no interest in helping the Israelis. But she is released anyway, and returns home to find herself without a job and suspected of being a traitor. Searching for redemption, she launches an investigation into the young man’s death that draws her into a Palestinian gay scene she never knew existed.

With Chloe and her Palestinian Australian lover as guides, Rania explores a Jerusalem gay bar, meets with a lesbian support group, and plunges deep into the victim’s world, forcing her to question her beliefs about love, justice, and cultural identity.

This is the second book in the Palestine Mystery series but the first one I read.  I definitely felt like I had missed something by not reading the first.  At the beginning Rania is imprisoned by Israel for something that happened in book 1 - we never quite figure out what that is.  Once she is released she is manipulated into solving the murder of a young gay Palestinian man who was said to be killed by an Israeli soldier.

This book is very political on many levels and a little difficult to follow if you aren't very familiar with the politics of this area.  Raphael's political views are very clear in her writing and she doesn't hold back her contempt for the Israeli government or military. I wish she had focused a little more on the Palestinian LGBT advocates and gay culture in a place where being gay is a death sentence, instead of the settlements and checkpoints although I know writing a book set in this part of the world can't eliminate this all together.  It almost felt like the mystery got lost in the politics.

There are many layers to the mystery due to the secretive and hidden nature of most lgbt people in Palestine.  I almost missed the big reveal of who murdered Daoud. It seemed almost anticlimactic and more of a side note.

This is a good mystery but too heavily bogged down with Palestine vs Israel politics. The author did an admirable job on touching on the Palestinian lgbt ignorance and intolerance but it still could have been more.  I really wanted to like this book.  I loved Rania the tough, female detective trying to balance her family and career in a very patriarchal society and culture but even with that it had a hard time keeping my interest.

Disclaimer: I received an advanced e-galley of this book from the publisher through netgalley.com in exchange for an honest review.