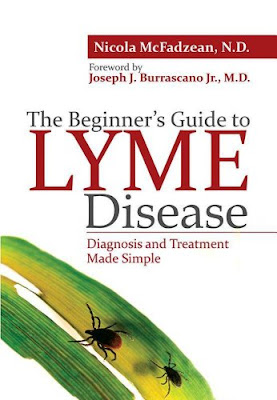 CNN has reported that the number of Lyme disease cases in the United States has doubled since 1991. Caused by spiral-shaped bacteria known as Borrelia burgdorferi, Lyme disease is transmitted to humans by the bite of an infected tick. The disease is also typically accompanied by many related problems, including co-infections by other kinds of microorganisms, hormonal dysfunction, immune system dysregulation, and other related issues.

The Centers for Disease Control (CDC) now recognize Lyme disease as the fastest spreading vector-borne disease in the country, yet most practitioners of mainstream medicine are decades behind in recognizing and addressing this emerging health crisis. This comprehensive book is the first book of its kind to approach Lyme disease from the perspective of "beginners"—those doctors, patients and caregivers who are new to the topic of diagnosing and treating Lyme disease


I was just recently diagnosed with Lyme Disease and picked this book up immediately to try to familiarize myself with the disease, symptoms, co-infections and treatments.  What I found was a comprehensive, easy to read and follow book that is a great place to start for anyone who is newly diagnosed.

Unfortunately being diagnosed with Lyme is not the final diagnosis, in most cases if you have tested positive for Lyme you should then be tested for the co-infections that are often found in people who have Lyme. Babesia, Bartonella, Ehrlichia and Rickettsia all come with their own symptoms and struggles making Lyme a multi-faceted disease to try to treat.

There is a lot of technical jargon in certain chapters that I skimmed through but its good to have as a reference such as the different tests that are given to verify lyme, which are not all created equal. There is a lot of information on treatment protocols including holistic protocols.

This is a great place to start but I'm not stopping here.