ARC Review: The Girl Who Lived by Christopher Greyson 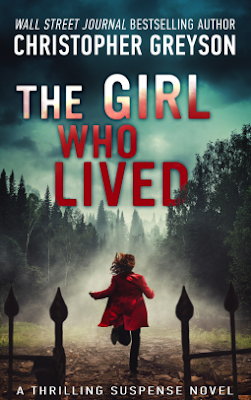 No one believes her story.
The police think she’s crazy.
Her therapist thinks she’s suicidal.
Everyone else thinks she’s a dangerous drunk.
They’re all right—but did she see the killer?

As the anniversary of the murders approaches, Faith Winters is released from the psychiatric hospital and yanked back to the last spot on earth she wants to be—her hometown where the slayings took place. Wracked by the lingering echoes of survivor’s guilt, Faith spirals into a black hole of alcoholism and wanton self-destruction. Finding no solace at the bottom of a bottle, Faith decides to track down her sister’s killer—and then discovers that she’s the one being hunted.

How can one woman uncover the truth when everyone’s a suspect—including herself?


Faith gets released from another psychiatric hospital and struggles to adapt to life outside.  Where everyone knows who she is because of her mothers book about the tragic incident that destroyed her life. The only one to survive a brutal attack that left her father, sister, best friend and her best friends mother dead, Faith has struggled with the fact that the police don't seem to take her account of that night serious.  Although she has given them a description of one of the perpetrators they close the case believing it was her father who committed this heinous act.  Faith wants the real murder caught but will he catch up to her first?

This story has twists and turns and you start believing you know who did it and then bam another twist with an ending I didn't see coming. This was a quick thriller that holds your attention and keeps you wondering who is pulling the strings.  Quirky, secretive characters and lots of suspects make this a great book to dive into and get lost for a little while.

Disclaimer: I received an advanced e-copy of this book from the publisher through net galley.com in exchange for an honest review.