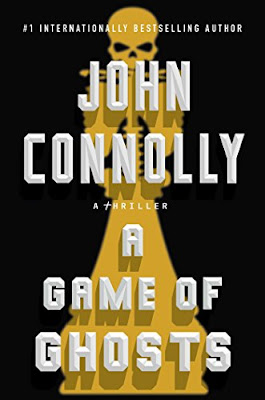 
It is deep winter and the darkness is unending. A private detective named Jaycob Eklund has vanished and Charlie Parker is assigned to track him down. Parker’s employer, Edgar Ross, an agent of the Federal Bureau of Investigation, has his own reasons for wanting Eklund found. Eklund is no ordinary investigator—he is obsessively tracking a series of homicides and disappearances, each linked to reports of hauntings. Now Parker is drawn into Eklund’s world: a realm in which the monstrous Mother rules a crumbling criminal empire, in which men strike bargains with angels, and in which the innocent and guilty alike are pawns in a game of ghosts...


This series just keeps getting better and better. There is always a supernatural twist to these books and this one is no exception.  While tracking down private eye Jaycob Eklund Charlie finds himself in the crosshairs of the Brethren. With the help of his trusted psychopath friends, Louis and Angel Charlie embarks on trying to track down the missing PI who seems to have stumbled upon the origins of the group known as the Brethren. Also tracking them is the Collector whose Hollow Men scare the Brethren.

Charlie is also dealing with the fallout from the last book when his daughter was abducted from his house but ultimately found safe.  She is a mysterious little creature with a big secret and it seems we may be getting more glimpses into what that may be as the series continues.  I'm not sure she is going to be able to keep hiding her specialness for much longer which will throw a whole new wrench in Charlie's life.

Twisted, terrifying and magical A Game of Ghosts doesn't disappoint but if you haven't read any other books in this series you may want to skip this until you have started more toward the beginning, you will probably be left confused and lost if you start with this installment.