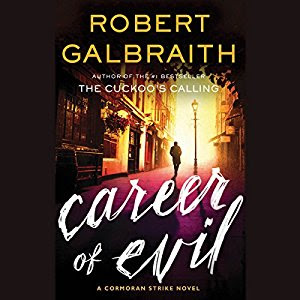 When a mysterious package is delivered to Robin Ellacott, she is horrified to discover that it contains a woman's severed leg.

Her boss, private detective Cormoran Strike, is less surprised but no less alarmed. There are four people from his past who he thinks could be responsible - and Strike knows that any one of them is capable of sustained and unspeakable brutality.

With the police focusing on the one suspect Strike is increasingly sure is not the perpetrator, he and Robin take matters into their own hands and delve into the dark and twisted worlds of the other three men. But as more horrendous acts occur, time is running out for the two of them....

I could listen to Robert Glenister read forever.  I love the way he interprets each character and his reading really sucks me into these stories.  I loved the first two in this series and like this one even better.  I really hope JK Rowling (Robert Galbraith is just her pen name) puts out the next book in this series sometime soon.  Its been about 3 years!

Cormoran and Robin have a great working relationship and the chemistry between them reminds me of the X-files Mulder and Scully.  You want them together but you're afraid of what might happen if they do get together.

This book has it all, mystery, suspense a great story line and great characters. I have listened to all of these (instead of reading a traditional ebook or paperback) and think I would do the same for any others, I just feel connected to the characters the way Glenister reads them.

There are some new characters that really are a great addition to the story line such as Shanker.  His character gives us insight into Strike and also is just a great stress relief.  I hope new ones like this continue to pop up.