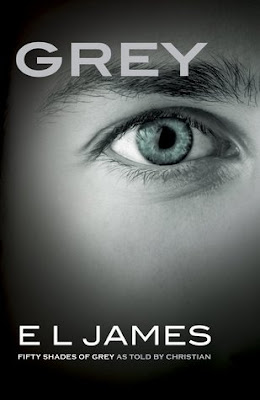 Christian Grey exercises control in all things; his world is neat, disciplined, and utterly empty—until the day that Anastasia Steele falls into his office, in a tangle of shapely limbs and tumbling brown hair. He tries to forget her, but instead is swept up in a storm of emotion he cannot comprehend and cannot resist. Unlike any woman he has known before, shy, unworldly Ana seems to see right through him—past the business prodigy and the penthouse lifestyle to Christian’s cold, wounded heart.

Will being with Ana dispel the horrors of his childhood that haunt Christian every night? Or will his dark sexual desires, his compulsion to control, and the self-loathing that fills his soul drive this girl away and destroy the fragile hope she offers him?

Why I subject myself to these is still a mystery but its like a moth to a flame I can't seem to not read them.  I really wish the author would find her own stories instead of capitalizing on Stephanie Meyers and her Twilight Series.  But I guess the dollar signs and potential movie scripts keep her going. This is a total ripoff of the book Meyers refused to release after it was stolen by a hacker and released to the web unfinished. The cover looks like a ripoff of the Host.  Really Ms. James please for the love of god find a unique story and stop this madness.

We revisit the 50 Shades of Grey book from Christian's point of view and I'm mighty disappointed.  Not that I was expecting anything different I mean it is the same damn book.  The writing was juvenile and stilted and honestly having a peak inside Christians mind was something I could have done without.  I think she would have been better off leaving this one alone.  His character went from the mysterious, freaky ultra rich guy to insecure, troubled child pretending to be a man.  I liked him much better from Ana's point of view.