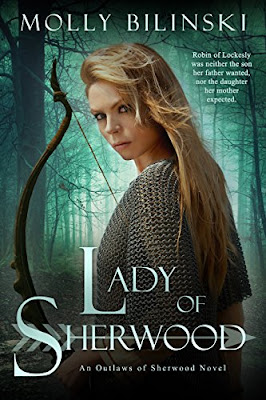 Robin of Lockesly was neither the son her father wanted, nor the daughter her mother expected. When she refuses an arranged marriage to a harsh and cruel knight, the deadly events that follow change her destiny forever.

After a night of tragedy, Robin and the few remaining survivors flee to Nottingham. With a newfound anonymity, they start to live different lives. There, she and her band make mischief, robbing from the rich and giving to the poor. But charity isn't the only thing she wants—she wants revenge.
As the sheriff draws his net closer, Robin's choices begin to haunt her. She'll have to choose between what's lawful and what her conscience believes is right—all while staying one step ahead of the hangman.

This is a unique retelling of the Robin Hood tale.  Instead of Robin Hood being male in this book all the main characters are women.  Its an interesting take on the tale and very empowering to young women.

Set in a time when arranged marriages were the norm and women were treated like property this book shines the light on one young woman who holds on to her convictions and her power.  Her father taught her how to Hunt and shoot and her mother desperate to make her into a lady tries to teach her to sew and behave in lady like ways.  After her father dies her mother is desperate to make an advantageous match for her despite Robin's wishes and love of a commoner.  The man she pledges her daughter to is cruel and when he is spurned resorts to deeds that leave Robin running from the hangman.

I really enjoyed this retelling of the famous tale and enjoyed the fact that they were all women. I will be looking out for the other stories in this series.