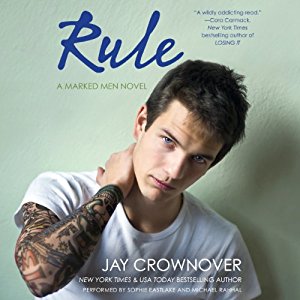 Shaw Landon loved Rule Archer from the moment she laid eyes on him. Rule is everything a straight-A pre-med student like Shaw shouldn’t want – and the only person she’s never tried to please. She isn’t afraid of his scary piercings and tattoos or his wild attitude. Though she knows that Rule is wrong for her, her heart just won’t listen.

To a rebel like Rule Archer, Shaw Landon is a stuck-up, perfect princess – and his dead twin brother’s girl. She lives by other people’s rules; he makes his own. He doesn’t have time for a good girl like Shaw – even if she’s the only one who can see the person he truly is.

But a short skirt, too many birthday cocktails and spilled secrets lead to a night neither can forget. Now, Shaw and Rule have to figure out how a girl like her and a guy like him are supposed to be together without destroying their love…or each other.


Romance for the tattooed and body pierced.  Rule Archer is gorgeous and cocky.  He has a slew of tattoo bunnies following his every move hoping to be the next in his bed.  Shaw is a family friend, almost a sister who has put up with his antics to appease his mother and in honor of Rule's twin brother Remi who was her best friend and because she has been in love with Rule since she was in 6th grade.

Rule hates going home his mother blames him for his twins death and doesn't try to hide her contempt for Rule and his tattoos and purple hair. Shaw come from money and has a family that is all about appearance.  She despises them and the guy they keep forcing on her despite her not wanting anything to do with him.

Rule and Shaw explode when they finally give in to their feelings but can this playboy stay a one woman man and be everything Shaw needs?

Well written, fun romance - can't wait to read the others in this series.

Discover other books or products I like: https://www.amazon.com/shop/readinggrrl
Labels: A marked Men novel Jay Crownover Rule