ARC Book Review: Lake Silence (World of the Others Book 6) by Anne Bishop 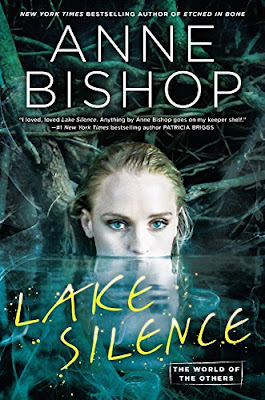 Human laws do not apply in the territory controlled by the Others--vampires, shape-shifters, and even deadlier paranormal beings. And this is a fact that humans should never, ever forget....

After her divorce, Vicki DeVine took over a rustic resort near Lake Silence, in a human town that is not human controlled. Towns such as Vicki's don't have any distance from the Others, the dominant predators who rule most of the land and all of the water throughout the world. And when a place has no boundaries, you never really know what is out there watching you.

Vicki was hoping to find a new career and a new life. But when her lodger, Aggie Crowe--one of the shape-shifting Others--discovers a murdered man, Vicki finds trouble instead. The detectives want to pin the death on her, despite the evidence that nothing human could have killed the victim. As Vicki and her friends search for answers, ancient forces are roused by the disturbance in their domain. They have rules that must not be broken--and all the destructive powers of nature at their command.

I haven't read any of the other books in the World of the Others, but I want to now! This is a great world filled with vampires, shape shifters and elementals, humans are the minority and if they go against the Others they usually wind up dead.

Vicki is an emotionally abused fragile woman who receives a property called the Jumble as part of her divorce settlement.  What she doesn't know is that the Jumble is a settlement for the Others to learn and interact with humans.  Her ex husband thinks he pulled a fast one by giving up the Jumble but his new wife believes it could make them a fortune since it is one of the only properties on the Finger Lakes. However what the ex husband doesn't count on is that the terms of the land agreement are very specific and if you break those agreements you will be dealing with more than the police.

This book is filled with interesting characters and a great fast paced writing style.  Vicki's world is turned upside down when she moves to Sproing, where she finds herself surrounded by strong men who appreciate her exactly as she is and are willing to protect her not tear her down.

I really enjoyed this book and want to go find some of the other books set in this world.  This does seem to be a stand alone book just set in the world of the others not a part of the others series.

Discover other books or products I like: https://www.amazon.com/shop/readinggrrl
Labels: Anne Bishop Lake Silence Others World of the Others