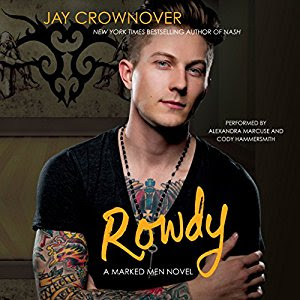 After the only girl he ever loved told him that he would never be enough, Rowdy St. James knocked the Texas dust off his boots and set out to live up to his nickname. A good ol' boy looking for good times and good friends, Rowdy refuses to take anything too seriously, especially when it comes to the opposite sex. Burned by love once, he isn't going to let himself trust a woman again. But that's before his new coworker arrives, a ghost from the past who's suddenly making him question every lesson he's ever learned.

Salem Cruz grew up in a house with too many rules and too little fun - a world of unhappiness she couldn't wait to forget. But one nice thing from childhood has stayed with her: the memory of the sweet, blue-eyed boy next door who'd been head over heels in love with her little sister.
Now fate and an old friend have brought her and Rowdy together, and Salem is determined to show him that once upon a time he picked the wrong sister. A mission that is working perfectly - until the one person that ties them together appears, threatening to tear them apart for good.


Rowdy is the next to learn that you can't outrun your past.  Nash's father took a bunch of misfit guys, trained them to be tattoo artists and also liked to play with their lives.  Just before he died he told Nash to hire smokin hot Salem Cruz to work in the new shop he had set to open. When Rowdy walks into the new shop he runs smack into his past in the shapely form of Salem, the next door neighbor who's sister broke his heart when he was a teenager.

Smoking hot sex, intriguing plot, and complicated relationships.  While this one felt a little different than the other 4 in this series it was still good. It also set up the romance for the next book in this series between Asa and Royal.