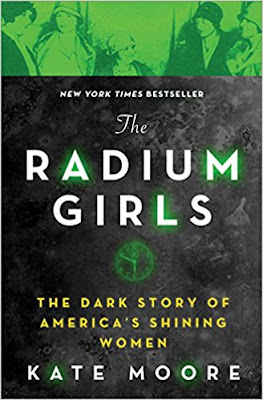 The Curies' newly discovered element of radium makes gleaming headlines across the nation as the fresh face of beauty, and wonder drug of the medical community. From body lotion to tonic water, the popular new element shines bright in the otherwise dark years of the First World War.

Meanwhile, hundreds of girls toil amidst the glowing dust of the radium-dial factories. The glittering chemical covers their bodies from head to toe; they light up the night like industrious fireflies. With such a coveted job, these "shining girls" are the luckiest alive — until they begin to fall mysteriously ill.

But the factories that once offered golden opportunities are now ignoring all claims of the gruesome side effects, and the women's cries of corruption. And as the fatal poison of the radium takes hold, the brave shining girls find themselves embroiled in one of the biggest scandals of America's early 20th century, and in a groundbreaking battle for workers' rights that will echo for centuries to come.


This was a fascinating if depressing tale of something I had no knowledge of.  Hundreds of young women were dead, dying or wasting away due to radium poisoning.  Everyone thought it was safe and the factories where these women worked paid well and at first didn't realize the danger they were putting these young women in. But as usual corporate greed takes over despite workers health or needs.

This is another dark spot in our history that is finally shining its light into the public. This book acknowledges these women's sacrifice and bravery in fighting back against a system that was stacked against them. With fraudulent doctors, revised safety reports and just a blatant disregard for the safety of these women they fought back against the corporations they trusted and a government that disregarded their plight.

I was impressed by the strength of these women and their families.  They were tenacious and though the odds were stacked against them they found a way to endure.  We have monuments for so many moments in history and these women surely deserve some recognition.