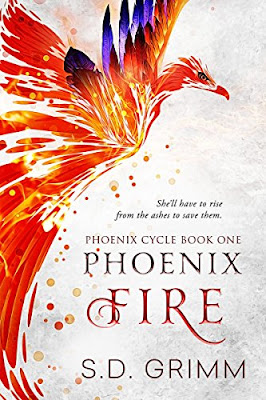 After spending her life in foster care, Ava has finally found home. But all it takes is a chance encounter with hot nerd Wyatt Wilcox for it to unravel.
Now, things are starting to change. First, the flashes of memories slowly creeping in. Memories of other lives, lives that Wyatt is somehow in. Then, the healing. Any cut? Gone.

But when Cade and Nick show up, claiming to be her brothers, things get even weirder. They tell her she’s a Phoenix, sent to protect the world from monsters—monsters she never knew existed. It’s a little hard to accept. Especially when they tell her she has to end the life of a Phoenix turned rogue, or Cade will die.

With Wyatt’s increasingly suspicious behavior, Ava’s determined to figure out what he’s hiding. Unless she can discover Wyatt’s secret in time and complete her Phoenix training, she’ll lose the life, love, and family she never thought she could have

This is an interesting start to a new series.  Phoenix are people who when they die come back, they have powers and can heal people and in turn make them Phoenix.  There are only certain phoenix who have the power to take the lives of other Phoenix thus rendering them truly dead. The catch to all this is that when Phoenix return they have no memory of their past lives until a certain point.

Ava is a Phoenix, she has spent her life floating from one foster home to the next but may have finally found a home when 2 boys show up in her life that she "remembers".  Cade and Nick are her brothers, Cade, her twin.  If there is anything that I can complain about in this book is the reaction of Ava to having actual blood family.  A child who has been through the system after finding their biological family would not even consider being adopted by a family she barely knew. Funny I could believe in Phoenix, magic, werewolves, etc but I couldn't wrap my brain around Ava and her her new found family. There wasn't even talk of her coming to live with them. It just seemed odd.

Other than that I found this book to be entertaining and fast paced.  Its an interesting premise, not one I've read before so I like the fresh take on the supernatural. The story is told from multiple viewpoints and is a little confusing in the beginning but you know something is going on just not what.  I expect that the story and writing will only get better with time.

Discover other books or products I like: https://www.amazon.com/shop/readinggrrl
Labels: Phoenix Fire SD Grimm