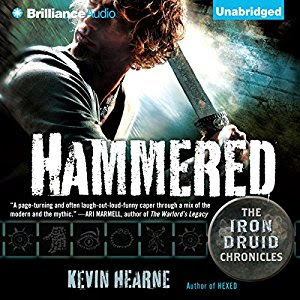 Thor, the Norse god of thunder, is worse than a blowhard and a bully—he’s ruined countless lives and killed scores of innocents. After centuries, Viking vampire Leif Helgarson is ready to get his vengeance, and he’s asked his friend Atticus O’Sullivan, the last of the Druids, to help take down this Norse nightmare.

One survival strategy has worked for Atticus for more than two thousand years: stay away from the guy with the lightning bolts. But things are heating up in Atticus’s home base of Tempe, Arizona. There’s a vampire turf war brewing, and Russian demon hunters who call themselves the Hammers of God are running rampant. Despite multiple warnings and portents of dire consequences, Atticus and Leif journey to the Norse plain of Asgard, where they team up with a werewolf, a sorcerer, and an army of frost giants for an epic showdown against vicious Valkyries, angry gods, and the hammer-wielding Thunder Thug himself.

Its been some time since I read one of these books but I kept meaning to get back to this series.  I've never listened to any of them and its definitely a different experience. I wasn't as big a fan of this book as I was of the first two. I like the character of Atticus but there were several things he did in this book that I'm not sure I could really accept as something he would do and don't make him as likeable as he was before.  I understand his need to keep his word but with all the warnings people were giving him I don't think he would have continued in his quest knowing what could happen if he went through with his quest to kill Thor.

I felt that the plot was a little all over the place so it was hard to keep track of what was going on as well. There were some brilliant moments, like the lunch Atticus had with Jesus and of course any dialogue with Oberon, Atticus's dog. This series has been compared to Jim Butchers Dresden series and while I like both series I think the Dresden files are a bit better laid out. This series has its troubles and I'm hoping that Hearne will work them out in the rest of this series.

Luke Daniels did an admirable job narrating this book, and his voice for Oberon is perfect and often had me laughing out loud which drew strange expressions from people nearby.

I'm hoping that the next book redeems itself.