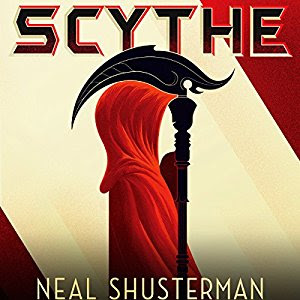 Two teens must learn the “art of killing” in this Printz Honor–winning book, the first in a chilling new series from Neal Shusterman, author of the New York Times bestselling Unwind dystology.

A world with no hunger, no disease, no war, no misery: humanity has conquered all those things, and has even conquered death. Now Scythes are the only ones who can end life—and they are commanded to do so, in order to keep the size of the population under control.

Citra and Rowan are chosen to apprentice to a scythe—a role that neither wants. These teens must master the “art” of taking life, knowing that the consequence of failure could mean losing their own.

Scythe is the first novel of a thrilling new series by National Book Award–winning author Neal Shusterman in which Citra and Rowan learn that a perfect world comes only with a heavy price.

The world has changed.  Death and disease don't exist anymore so in order to maintain balance and enough resources on the earth Scythes have now taken on the role of death dealers.  No longer considered murder they "glean" random people in order to maintain the population.  Scythes are supposed to do their job with honor but a handful of scythes want a new order to take over, those who enjoy their job and take pleasure in "gleaning".

I am fascinated by this new world where people only become "deadish" unless killed by a Scythe.  They just go to a regeneration center and are back to their lives in a few days.  Bored some even resort to finding new and horrific ways to "splat" or become "deadish". Its an interesting world filled with problems that no one ever would have thought living forever gave. There is not really any religion anymore because with no death there is no use of a God to fear and the only true way to die is either at the hands of a Scythe or to be burned beyond what their implanted nanites can fix.

This new order of Scythes are vindictive, and more in line with sociopaths of today.  Since there is no crime and no jails people in this world have no idea what that means and since they have immunity to do their jobs they get away with their evil deeds. Pitted against each other by a ruthless new world Scythe Citra & Rowan fight a single position of Scythe, but the loser will be gleaned.

This is a character driven book with characters that you really get to know and either cheer for or hope they meet a nasty demise.  Its an interesting new world and I'm anxious to read the sequel.