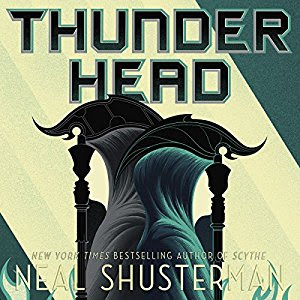 Rowan and Citra take opposite stances on the morality of the Scythedom, putting them at odds, in the chilling sequel to the Printz Honor Book Scythe from New York Times best seller Neal Shusterman, author of the Unwind dystology.

The Thunderhead cannot interfere in the affairs of the Scythedom. All it can do is observe — it does not like what it sees.

A year has passed since Rowan had gone off grid. Since then, he has become an urban legend, a vigilante snuffing out corrupt scythes in a trial by fire. His story is told in whispers across the continent.

As Scythe Anastasia, Citra gleans with compassion and openly challenges the ideals of the "new order". But when her life is threatened and her methods questioned, it becomes clear that not everyone is open to the change.

Will the Thunderhead intervene?

Or will it simply watch as this perfect world begins to unravel?

Whoa, I'm not sure what to say or even where to start a review with this one.  The Thunderhead is basically the cloud that is now attached to an AI that basically controls the entire world. He goes about his tasks blissfully and without little judgement. He is not supposed to be involved in Scythe business but finds loopholes in his programming that allows him to help Scythe Anastasia (Citra) since his algorithms have told him she is important to the future.  With the help of another human the Thunderhead attempts to right some of the wrongs and set things on a correct path but when things spiral out of control the Thunderheads response is jaw dropping.  I have no words - didn't see the end coming and really hope Neal Shusterman has another book for this series in the works.

The characters were well developed, the technology and the world is utterly believable and the almost de-evolution of man is ingenious.