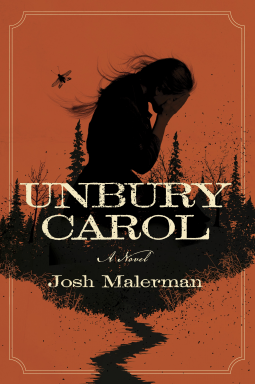 Carol Evers is a woman with a dark secret. She has died many times . . . but her many deaths are not final: They are comas, a waking slumber indistinguishable from death, each lasting days.

Only two people know of Carol’s eerie condition. One is her husband, Dwight, who married Carol for her fortune, and—when she lapses into another coma—plots to seize it by proclaiming her dead and quickly burying her . . . alive. The other is her lost love, the infamous outlaw James Moxie. When word of Carol’s dreadful fate reaches him, Moxie rides the Trail again to save his beloved from an early, unnatural grave.

And all the while, awake and aware, Carol fights to free herself from the crippling darkness that binds her—summoning her own fierce will to survive. As the players in this drama of life and death fight to decide her fate, Carol must in the end battle to save herself.

The haunting story of a woman literally bringing herself back from the dead, Unbury Carol is a twisted take on the Sleeping Beauty fairy tale that will stay with you long after you’ve turned the final page.

I've never read Josh Malerman before but I forsee a few of his books making their way onto my TBR list. A cross between a supernatural western and sleeping beauty. This book was really well done. There was mythology, "magic" and some really creepy characters. Carol has a condition where under stress she lapses into a coma where she appears dead.  Her mother has always feared that she would one day be buried alive and makes sure that Carol always tells someone else about her condition. After her best friend dies the only other person in the town who knows about Carol is her husband, fearing that this isn't good enough Carol decides to confide in her maid but before she can she lapses into a coma. Her husband decides this is his chance to get rid of his wife and keep her fortune for himself. What he doesn't know is that Carol did mention to her maid that her boyfriend from the past, the outlaw James Moxie also knows of Carols condition. When Carol "dies" her maid sends off a telegram to the outlaw and thus begins a race to save Carol.

There were so many really interesting elements to this book from the characters to the mystery of the "trail".  The mystery kept you on the edge of your seat right up to the bitter end. I really enjoyed this book.

Discover other books or products I like: https://www.amazon.com/shop/readinggrrl
Labels: josh malerman unbury Carol