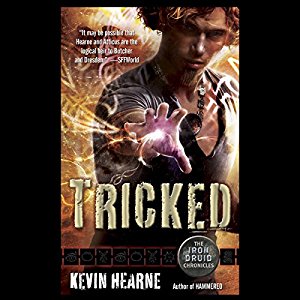 Druid Atticus O'Sullivan hasn't stayed alive for more than two millennia without a fair bit of Celtic cunning. So when vengeful thunder gods come Norse by Southwest looking for payback, Atticus, with a little help from the Navajo trickster god Coyote, lets them think that they've chopped up his body in the Arizona desert.

But the mischievous Coyote is not above a little sleight of paw, and Atticus soon finds that he's been duped into battling bloodthirsty desert shape-shifters called skinwalkers. Just when the Druid thinks he's got a handle on all the duplicity, betrayal comes from an unlikely source. If Atticus survives this time, he vows he won't be fooled again. Famous last words.

Better than the last book this one take place a little while after the last one. This time Atticus learns the consequences of his actions in killing yet another God and also learns that he is not as smart as he thinks he is. Coyote agrees to help Atticus disappear from the God's radar but what he wants in return is not all that it seems.  Coyote manipulates him, tricking him into helping him with skin walkers that are killing people on the Rez. Leif, Atticus's long time vampire friend whose vendetta against Thor put Atticus in the position he is in today also tricks him into helping him take back his territory.

The relationship between Atticus and his apprentice is also explored and we almost lose a dear friend. I love Atticus's dog Oberon and have found out that there are two books with Oberon as the main character which I need to find. Overall I think this book redeemed a lot of the negative feelings I was having toward this series from the last book.  I'm glad I hung in there.