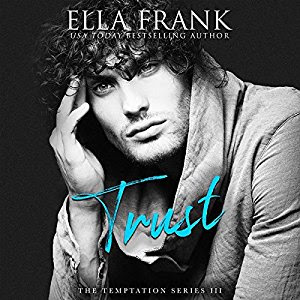 TRUST – verb: to believe in the reliability, truth, or strength of another.

Up until now, Logan Mitchell has never had much of a reason to trust anyone.
Having struggled with a self-identity crisis throughout college, he’s spent the years since then creating a sophisticated facade to present to the world.

It’s an armor he thought was impenetrable—until he met Tate Morrison.
The gorgeous, headstrong bartender he’d sat across from only months ago has taken a tight hold of his heart, and Logan is discovering that it’s time to let go.
It’s time to let someone inside.

After years of placing his dreams on hold for his family, Tate has finally chosen to do what makes him happy and follow his heart.

The one thing he never would’ve imagined was that it would lead him into the arms of a man—and not just any man—the striking, never-takes-no-for-an-answer Logan Mitchell.
Tate has fallen hard, and as his world is turned on its axis and they move forward together, he finds his life becoming more entwined with the confident, successful lawyer.

Even though neither man expected the other, it’s time to trust in their relationship—but not everything comes so easily…

This installment of the hot sexy m/m romance/erotic series had me gasping and trying to hold back tears several times. Again Ella Frank hits it out the park with a spot on terrifying and very real story of what happens when you partner winds up in the hospital without a power of attorney or something giving them visitation and rights to discuss medical treatments. When the only people allowed to make decisions and visit are their homophobic parents who don't consider the feelings of the person who is hospitalized or the person they love. It was heartbreaking and so well written. I love this series not only for the hot sex scenes but the very real situations Frank puts in her story to bring the hardships that many lgbtq couples face to people who may not otherwise even know about them.