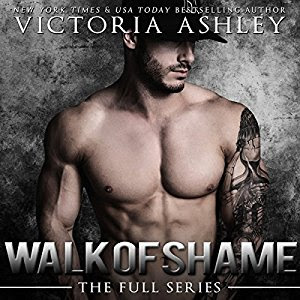 Slade
My name is Slade Merrick and I'm a f--king sex addict... I've been told it's a problem. But I see it as a passion; something that I'm good at. And who the f--k stops something that they're good at? They want me to seek help; get my cock in check. Don't judge my lifestyle. You're no better than me. Just admit it, you like to f--k too. Sex is what I do best; my own personal high, so I embrace it instead of being ashamed. When I'm not f--king, I'm slinging drinks at Walk Of Shame or stripping my way into your bed; another thing I'm good at. Every woman's darkest fantasy brought to life. So, am I stopping? F--k no. Sex is beautiful, raw, and erotic and I get off knowing I can have it with anyone I want... with the exception of her. Aspen. She walks into the club swaying those hips, instantly drawing my cock to attention. She's pure perfection. That is, until she opens that mouth, drawing me in and for the first time in forever I want something more than sex. I want her and she hates it.

My name is Hemy Knox and I'm a f--king heartbreaker... I've hurt the one person that means the most to me in life; the only woman I have ever f--king loved. I let the drugs, alcohol and wild life take over; consume me. I got her where I wanted her and ripped her f--king heart out. Since then, I've spent countless nights having dirty, meaningless sex with a multitude of people; only leaving them wanting and begging for more with no regrets. Some may even call me the devil; soulless. They look and judge, but there is one thing they don't know; no one does. I want more than this life of stripping and sleeping around; the never ending party. I want love and everything that comes with it; that high that never ends. The problem is... I only want it with her. Onyx. She refuses to be mine... again. She's smart and it's a mother f--king pain in my ass; guarding her heart while ripping mine right out of my chiseled chest. I can't say that I blame her. I always was a dumb ass when it came to the emotions of a woman, especially her. She wants to see me suffer as much as I made her; watch me wither and f--king die at her feet. She wants to crush me until I'm no longer breathing and I will let her, because it hurts far less than not having her as mine. I will stop at nothing to make her mine again.

My name is Cale Kinley and I'm a f--king virgin...Well, with the exception of my tongue. The countless things I can do with my tongue are bound to leave you breathless and begging for more, but more...is something that I can't give. It's a choice. My choice. There's a reason for that. A very good reason, and that reason is her. Riley. She's the only woman that I want to bury myself deep in. The one woman I have wanted since I was old enough to f--k. I never got my chance though, because she left. She had no choice and it stung like hell.

This was broken down by book.  Slade Merrick was first.  This book started out really rocky for me.  The writing felt a bit juvenile and repetitive the sex scenes written in a very elementary way, but as it continued it did get better.  Its like the author finally caught her groove.  The story itself got better, the sex steamier and I actually found myself enjoying the story. Slade is a broken man who is drowning his broken heart in booze and sex.  He gave up a promising career to strip at the Walk of Shame. His rule is to never have sex with the same person twice but when Aspen stumbles into his life he can't seem to help his heart from thawing and he starts feeling things he hasn't for a long time.

Hemy Knox came next. Hemy is a stripper at the Walk of Shame bar, the love of his life left him 4 years ago when he runs into her at a job. Seeing her again Hemy is determined to make her his again. Onyx left 4 years ago because she couldn't stand to have Hemy continue to break her heart with his drug use and the women who would always run their hands over him while he was high. In Slade it was alluded to that Hemy is bisexual and with the exception of one minor scene I just didn't see it at all.  Once again the writing began extremely repetitive and simple.  If I had to hear about Onxy's P*&^ one more time....use some imagination, her sex, her wetness, anything but repeating the P word several times in one sentence. Again the story line was good but the writing could use some work.  Although I do have a thing for tattooed pierced men.

Cale Kinley, he keeps referring to himself as a virgin but I'm not sure I would quite agree with that.  No he hasn't had intercourse but he's pretty much done everything else. Cale promised to save himself for his one love Riley. When Riley returns to town and she reconnects with Cale it starts out shaky but then quickly gets heated.  While the sex was better in this book than the previous two, I think this writer is better at the romance than the smoking hot, panties up in flames books.  Keep it simple and tame and let the story carry the book.  Its almost painful reading some of these encounters. Not sure I will pick up the next books in this series.