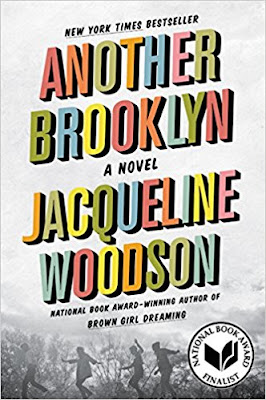 Running into a long-ago friend sets memory from the 1970s in motion for August, transporting her to a time and a place where friendship was everything—until it wasn’t. For August and her girls, sharing confidences as they ambled through neighborhood streets, Brooklyn was a place where they believed that they were beautiful, talented, brilliant—a part of a future that belonged to them.

But beneath the hopeful veneer, there was another Brooklyn, a dangerous place where grown men reached for innocent girls in dark hallways, where ghosts haunted the night, where mothers disappeared. A world where madness was just a sunset away and fathers found hope in religion.

This is not your average coming of age story.  This is written more like poetry, or stream of consciousness.  You can taste the humid air of Brooklyn as you peer out of a 3rd floor window down onto the streets of another time. We like to look back on childhood as carefree but it wasn't always even though it felt that way. Four young girls form a bond they think will last forever.  Each with hopes and dreams and secrets. 1970's Brooklyn was a time of change, the neighborhood changed, black power was a movement, yet kids still played in the fire hydrants and stole kisses in alleyways. As each of the girls grows up they find their own path, some make it, some get lost along the way.

This is a magical book, the way it is written takes some getting used to but you find yourself rereading sentences that take you back in time. I never would have picked it up if it wasn't a selection of a book club I just joined and I'm so glad to have read it.  Its not a long book but it packs a punch.

Discover other books or products I like: https://www.amazon.com/shop/readinggrrl
Labels: African-American Another Brooklyn Jacqueline Woodson