Skip to main content
Labels
Posted by Heidi (ReadingGrrl) May 22, 2018 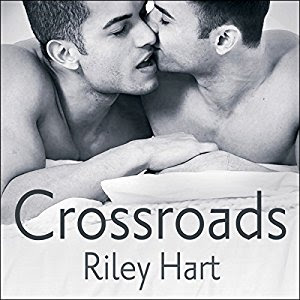 After divorcing the woman he'd been with since he was 17, Nick Fuller is starting over. He owns the restaurant of his dreams, and he's determined to meet new people, find new passions, and experience life to its fullest. Easier said than done - that is until he meets his new neighbor, Bryce Tanner.

Neither man has ever wanted another guy, but there's a connection between Nick and Bryce from the start - a spark they can't deny. They find themselves navigating an unfamiliar new world and dealing with unforeseen obstacles. Physical desire isn't enough, and now Nick and Bryce are at a crossroads. They have to decide which way to go: the easy path they've always followed or the one that's determined to trip them up at every turn.

Nick and Bryce are neighbors who share a backyard. They start spending a lot of time together and neither of them thinks anything of it until Bryce's brother mentions that he supports Bryce in his decision to be with Nick.  Freaked out by this Bryce starts to question if what his brother sees is true. Fumbling into uncharted territory Nick and Bryce try to come to terms with the change in their friendship. Both feel drawn toward the other but while Bryce dives in head first Nick still struggles with it trying to figure it all out.

This is an interesting twist on coming out and discovering feelings for someone you never would have even considered if it hadn't just happened. It hits all the main topics, coming out to family, coming out to friends, coming out to yourself. Not to mention the hot sexy new exploration of a lovers body and how to pleasure them.

This is a well done book I'm not sure why it didn't grab me enough for a four star rating but there was just something missing.  Although I will say it got better as the book went on. Definitely worth the read.