Skip to main content
Labels
Posted by Heidi (ReadingGrrl) May 16, 2018 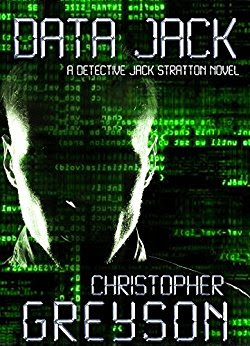 Jack Stratton's back is up against the wall. He's broke, kicked off the force, and his new bounty hunting business has slowed to a trickle. With no money coming in, Jack's license to carry suspended, and no good job prospects on the horizon, Jack's got it tough. He thinks things are turning around when Alice (aka Replacement) gets a lucrative job setting up a home data network. That is, until he discovers it's for a handsome, jet-setting software tycoon. The "boy billionaire" as Jack grudgingly refers to him, takes a liking to computer-savvy Alice. Jealous, Jack thinks life can't get any worse, but when the computer program the CEO invented becomes the key tool in an international data heist, things turn deadly. In this digital age of hackers, spyware, and cyber terrorism--data is more valuable than gold. The thieves plan to steal the keys to the digital kingdom and with this much money at stake, they'll kill for it. Can Jack and Alice stop the pack of ruthless criminals before they can Data Jack?

Through all these books its always been Alice that has been the jealous one.  When the women throw themselves at Jack she is right there to stake her claim. This time its Jacks turn. Pierce, the "boy billionaire" finds Alice amazing.  He can talk tech with her she is gorgeous and has a great sense of humor, the only problem is her boyfriend Jack.  But Pierce has a thing for going after things he isn't supposed to have.

Alice isn't sure what's going on with Jack.  All of a sudden he has pulled back. She is ready to take their relationship to the next level and he has put on the breaks. What she doesn't know is that its all because of a promise he made to their Aunt Haddie.

Jack tries to rein in his jealousy and keep Alice close as she works along side Pierce who has obvious interest in her. When things start to get strange at the mansion and people start getting hurt Jack is called in to the rescue.

Another fun mystery with great characters. These books remind me a bit of Janet Evanovich's number series books which are light hearted mysteries with fun characters that you just want to keep reading about.