Skip to main content
Labels
Posted by Heidi (ReadingGrrl) May 23, 2018 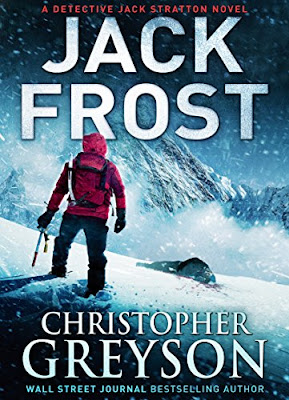 Jack has a new assignment: to investigate the suspicious death of a soundman on the hit TV show Planet Survival. Jack goes undercover as a security agent where the show is filming on nearby Mount Minuit. Soon trapped on the treacherous peak by a blizzard, a mysterious killer continues to stalk the cast and crew of Planet Survival. What started out as a game is now a deadly competition for survival. As the temperature drops and the body count rises, what will get them first… the mountain or the killer?

In 6 books Jack and Alice always work together having each others backs but this time Jack is sent up a mountain to go undercover while Alice stays behind to do research.  Unfortunately the mother of all blizzards keeps them from talking and Alice has information that is vital to Jack but Jack is fighting to survive.

This book really has 2 separate stories. One involving Jack and his assignment to investigate the death of several people on the show Planet Survival and the other what happened to Alice's family. Jack and Alice enlist the help of Kiku from the Yakuza to help them uncover who was responsible for the death of Alice's family, her mother, father and twin brothers. In the last book Jack discovered that the driver of the truck that hit her parents car and fractured her world didn't die in the crash but had disappeared. This story is a set up for the next book, while Jack and his undercover work on the tv show is really the center stage.

Honestly out of all of these books this was my least favorite.  I really appreciate the interplay between Alice who never listens to what Jack tells her to do, and Jack who thinks he's in charge. Having Jack and Alice in 2 locations broke that connection.  While I like the addition of Kiku and the way she handles her investigations it just didn't compare when Jack is there to interact with them all.

The story was interesting but honestly not as interesting as what Alice and Kiku were discovering. Overall this was a good installment but not the best.  I'm glad I decided to read all the others before beginning this so that I had an understanding of who all the players were and how they interacted, I'm not sure I would have been able to follow this as a stand alone.