Skip to main content
Labels
Posted by Heidi (ReadingGrrl) May 09, 2018 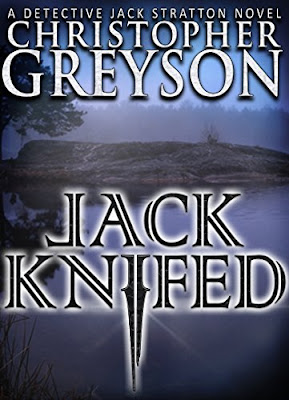 Jack felt the familiar burn of shame in his chest.
Why do I keep doing this...thinking about her? It was so long ago, but I can't get what happened out of my head. I shouldn't let any of that junk define me, but I still do. I'm driving in circles, caught in some loop that I can't break out of. I want to know why she abandoned me...but some things, I guess, I'll never know....
Handsome police officer Jack Stratton is the "hometown hero cop with a heart of gold". Constant nightmares have forced him to seek answers about his rough childhood and the dark secrets hidden there.

With Alice (aka Replacement) by his side, Jack travels to Hope Falls to solve a murder that occurred before he was born. Everyone in the small town remembers the unsolved murder of Steven Ritter, but after 27 years, no one thought that someone would look into it - but they don't know Jack.

Jack hasn't seen his mother since she left him at a bus station when he was 7. He doesn't even know his real name, since his mother only called him horrible names.  When Jack finds out his mother is in a mental hospital with early dementia he goes to visit hoping for answers, instead he gets more questions. Is his father dead? Who killed him? Can he find out? Replacement and Jack travel to Hope Falls to see if they can discover more about Jack's past.

Another well done fast past and easy to read mystery by Greyson. I love Jack and the way he just finds trouble and replacement who seems to get in just as much trouble as Jack. Digging up your past is never easy and this might just prove harder than Jack thought.