Skip to main content
Labels
Posted by Heidi (ReadingGrrl) May 18, 2018 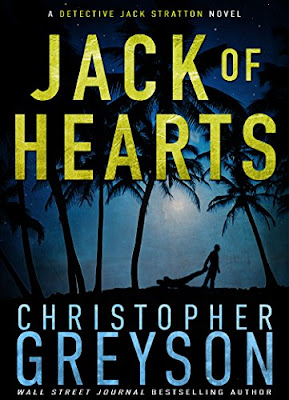 Jack Stratton is heading south for some fun in the sun. Already nervous about introducing his girlfriend, Alice, to his parents, the last thing Jack needed was for the dog-sitter to cancel, forcing him to bring Lady, their one-hundred-and-twenty-pound King Shepherd, on the plane with them. The dog holds Jack responsible and wants payback. On top of everything, Jack is still waiting for Alice's answer to his marriage proposal.

When his mother and the members of her neighborhood book club ask him to catch the "Orange Blossom Cove Bandit," a small-time thief who's stealing garden gnomes and peace of mind from their quiet retirement community, how can Jack refuse?

The peculiar mystery proves to be more than it appears, and things take a deadly turn. Now, Jack finds it's up to him to stop a crazed killer, save his parents, and win the hand of the girl he loves--but if he survives, will it be Jack who ends up with a broken heart?

We finally meet the family that adopted Jack and while Jack may not be their biological son they sure share a lot of characteristics.  Jacks mother is a funny, determined woman, much like Alice (no wonder Jack falls for her!) and his father is so in love with his wife that he will do anything to keep her happy (like sticking to a crazy diet).

When things start being stolen from their retirement community Jack's mother and her book club decide to take on the case.  However there may be more than one thief and one is very dangerous.

Filled with witty fun, and great mystery Greyson hits it out of the park with this installment of the Jack Stratton series as well. I loved the antics of the book club and the addition of the large crazy dog, Lady is a great addition.