Skip to main content
Labels
Posted by Heidi (ReadingGrrl) May 11, 2018 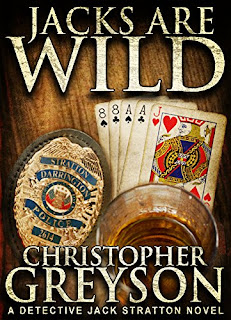 Handsome white-knight police officer Jack Stratton is back in this action-packed, thrilling adventure. When his sexy old flame disappears, no one thinks it's suspicious except Jack and one unbalanced witness. Jack feels in his gut that something is wrong. He knows that Marisa has a past, and if it ever caught up with her - it would be deadly. Determined to buck the critics and listen to his instincts, he and his feisty sidekick Alice (aka Replacement) plunge ahead and start tracking down leads, hoping to find Marisa in time.

The trail leads them into all sorts of trouble - landing them smack in the middle of an all-out mob war between the Italian Mafia and the Japanese Yakuza. When evidence surfaces that Marisa was kidnapped, Jack must navigate through the warring parties, assassins, and cold-blooded hit men to outwit the cunning kidnappers before it is too late. As the body count rises, the stakes in this game are life and death, with no rules except one - Jacks Are Wild.

If you haven't fallen in love with Jack and Alice (aka Replacement) yet this one is sure to help fix that. Jack's has gotten on the wrong side of his boss one too many times and finds himself walking a beat, one that takes him past his old girlfriends tattoo shop. When Marisa goes missing Jack finds that he can't help but get involved despite the fact that he knows he will be stepping on more toes.

Marisa has a past one that very few people know and of course Jack. Turns out Marisa is related to the biggest mob boss and when bodies start falling and Marisa gets kidnapped Jack finds himself trying to stop an all out war between the Yakuza and the Italian mob, as well as dodge the FBI and his boss.

Alice of course involves herself in the case, trying to keep Jack safe and also helping with anything related to computers, but sometimes her shortcuts have unwarranted consequences but she always has Jack's back.  In fact she always seems to be saving him from himself and everyone else who is trying their damnedest to kill him. She may be a little thing but she is a strong independent character who has Jack wrapped around her finger.

This series continues to surprise me with how fun it is. I love the characters and the growing romance between Jack and Alice. I love their landlord, the nosy woman who was always threatening to evict him before Alice showed up and there is the addition of a new strong female character who works for the Yakuza who I hope to see again in future books.