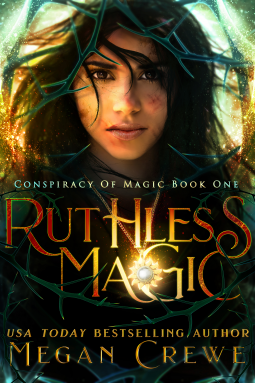 In the contest to keep their magic, the only options may be die... or kill.

Each year, the North American Confederation of Mages assesses every sixteen-year-old novice. Some will be chosen. The rest must undergo a procedure to destroy their magical ability unless they prove themselves in the mysterious and brutal Mages' Exam.

Disadvantaged by her parents' low standing, Rocío Lopez has dedicated herself to expanding her considerable talent to earn a place in the Confederation. Their rejection leaves her reeling—and determined to fight to keep her magic.

Long ashamed of his mediocre abilities, Finn Lockwood knows the Confederation accepted him only because of his prominent family. Declaring for the Exam instead means a chance to confirm his true worth.

Thrown into the testing with little preparation, Rocío and Finn find themselves becoming unlikely allies—and possibly more. But the Exam holds secrets more horrifying than either could have imagined. What are the examiners really testing them for? And as the trials become increasingly vicious, how much are they willing to sacrifice to win?

Old magic mages aren't fond of new magic mages.  They aren't given the same priorities and their schools aren't even taught the same way.  When it comes to being accepted into the magical college new magic usually always has to declare for entrance while old magic mages are confirmed despite whether or not their magic is strong. This is sort of a new money/old money fight where the kids have to prove themselves in a magical Hunger Games.

The story is told in alternate chapters of either Rocio a new magic mage of great talent whose abilities seem to be feared by the confederation and Finn who is old magic and comes from a prominent family.  He was confirmed but declined feeling that it was unfair and instead declared for a place. It was interesting to view the things going on through these two very different lenses.

Brutally pitting the kids against magic and each other the confed will only declare a few champions, to take their place in the magical world the others will have their magic burned out. After a brief introduction and set up there is non-stop action and chaos.  Questions abound as to how much the magical world knows about what goes on during these trials and what the nature of magic really is.  Is it alive? Great set-up for the next book but also very good as a stand alone.

Discover other books or products I like: https://www.amazon.com/shop/readinggrrl
Labels: conspiracy of magic magic megan crewe ruthless magic ya