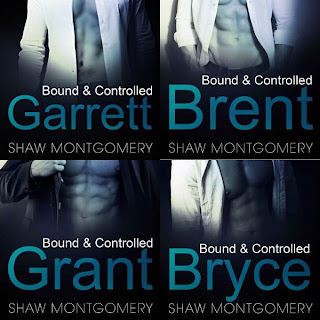 Garrett was at his breaking point.
There were only so many times in a week you should have to see someone you were...attracted to...infatuated with...but certainly didn’t have a crush on. Doms didn’t have those. Especially on a customer who probably wasn’t even gay, much less a sub. Business 101 - do not flirt with a client.
Wyatt was losing his mind.
Hiding his obsession was getting harder and harder. All he wanted to do was kneel in front of Garrett and call him Master. But the sexy insurance agent never seemed to see him. He only noticed the nervous, awkward insured who came in way too often.
When the two men are missing what’s right in front of their faces, it might take family stepping in to point out the obvious. That they were meant for each other.
Brent:
Brent had fallen for the one Dom he couldn't have.
Brent's legendary bad luck when it came to men was undeniable. If there was a wanna-be Dom in a hundred miles, he found them. But even he couldn't have predicted what would happen next. Mixed signals and too much time off won't make it any better, or will it?
Calen had fallen for the one sub he couldn't have.
Calen knew most considered him the seen-them-and-leave-them type of Dom, but how could he stay when he knew they wouldn't understand? When you're a Dom who doesn't match up to stereotypes, can you ever find the right submissive?
Grant:
Grant had found his perfect man...wrapped in silk and lace.
Grant had always loved more feminine men. A sexy guy in lingerie just did it for him. But when you looked more like a bouncer than an insurance agent, the pretty guys ran for the hills. Carter seemed different, though. When he looked at Grant, he saw the real man underneath the tattoos and muscles. Could Grant make him understand that he liked Carter just the way he was, or would Carter's doubts keep them apart?
Carter had found his perfect man...sweet, sexy, and built like a tank.
Grant didn't seem to mind Carter's more feminine look, but was he too good to be true? One bad date after another had left Carter gun-shy. Now, he had Mr. Right standing at his doorway. Did he have the courage to be himself and let Grant in, or would his fears keep them apart?
Bryce:
He'd watched them for so long it probably counted as stalking.
Bryce was confident when it came to work and his family, but hesitant when it involved relationships. He'd found subs that he pulled to him and Doms that could make his knees weak for a scene or two, but no one that tugged at his heart or who could understand what it was like to be both a Dom and a sub - until he'd seen Troy and Oliver.
They'd watched him for so long they decided to keep him.
Bryce hovered around them like a moth drawn to a flame. He circled and watched but never came closer, never approached them. Troy and Oliver were tired of waiting. They knew they needed a third to make them complete, and they knew they needed Bryce. But was he ready? They didn't want a one-night stand or a casual fling. They wanted everything with the confused switch who'd caught their eye and possibly their hearts.

She has taught her boys to respect their subs and requires a collar before one decides to live with one. This is a fun well done series...each brother with quirks of their own navigating their sex life and their personal life along with their insurance business which seems to employ only people accepting of their unique lives.