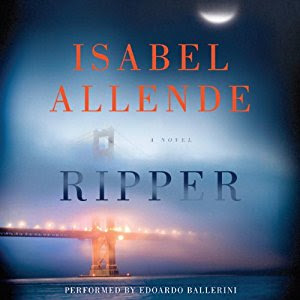 The Jackson women, Indiana and Amanda, have always had each other. Though their bond is strong, mother and daughter are as different as night and day. Indiana, a beautiful holistic healer, is a free-spirited bohemian. Long divorced from Amanda's father, she's reluctant to settle down with either of the men who want her - Alan, the wealthy scion of one of San Francisco's elite families, and Ryan, an enigmatic, scarred former Navy SEAL.

While her mom looks for the good in people, Amanda is fascinated by the dark side of human nature - as is her father, the SFPD's deputy chief of homicide. Brilliant and introverted, the MIT-bound high school senior Amanda is a natural-born sleuth addicted to crime novels and to Ripper, the online mystery game she plays with her beloved grandfather and friends around the world.

When a string of strange murders occurs across the city, Amanda plunges into her own investigation, probing hints and deductions that elude the police department. But the case becomes all too personal when Indiana suddenly vanishes. Could her mother's disappearance have something to do with the series of deaths? Now, with her mother's life on the line, Amanda must solve the most complex mystery she's ever faced before it's too late.

I love Allende's books.  This was her first foray into mystery.  I was a little lost in the beginning just due to there being so many characters. I did eventually catch on but I think that this would be better read than listened to.

Amanda is a precocious young woman who is obsessed with crime.  She forms a group called Ripper who investigate crimes and talk about different serial killers. Her grandfather is a part of the group and helps his granddaughter with her strange obsession. Amanda's father is a police officer giving her and her grandfather access to a lot of the police files. When people start dying Amanda and her team try to solve the murders.  While the victims seems random is there a connection?

This is well written with Amanda drawing you in and helping you get caught up in the investigation. You get pulled along and then Indiana, Amanda's mother goes missing and solving the case becomes so much more important. As they get closer and closer the book picks up speed. The killer was actually a surprise and the ending well done. I would recommend reading this instead of getting it as an audio book