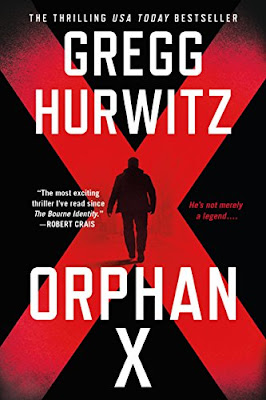 The Nowhere Man is a legendary figure spoken about only in whispers. It’s said that when he’s reached by the truly desperate and deserving, the Nowhere Man can and will do anything to protect and save them. But he’s not merely a legend.

Evan Smoak is a man with skills, resources, and a personal mission to help those with nowhere else to turn. He’s also a man with a dangerous past. Chosen as a child, he was raised and trained as an Orphan, an off-the-books black box program designed to create the perfect deniable intelligence asset: An assassin. Evan was Orphan X—until he broke with the program and used everything he learned to disappear. But now someone is on his tail. Someone with similar skills and training who will exploit Evan’s secret new identity as the Nowhere Man to eliminate him.

Trained as an assassin as a child Evan broke with his government and disappeared reinventing himself as the Nowhere Man.  Evan helps those who are desperate, not seeking payment but for those he helps to pay it forward and give his number to someone else they feel could use his help.

His latest case is different and he realizes that someone is using his new identity to flush him out - no he just has to figure out who and why.

This is a fast paced thriller that reminds me of the beginning of the Bourne series, except in this Evan isn't just trying to blend in, he uses his talents to help those who are desperate. It was interesting to see Evan evolve in this book and to read about his beginnings and how his trainer didn't just want to create an assassin but someone who didn't lose their humanity along the way.

The character development of several of the supporting characters is well done and I felt invested in what happened to them. I'm looking forward to reading the next book in the series.