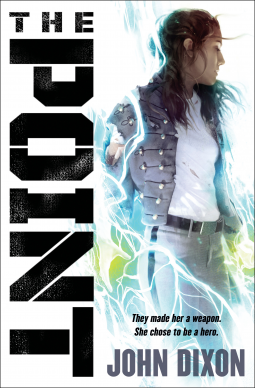 Welcome to The Point, future leaders of the Posthuman Age.

New Cadets, society is not ready for you. The oldest, fiercest fear is ignorance. The general population would burn you at the metaphorical stake.

Here, you will train alongside other posthumans. You will learn to control and maximize your powers and to use them for the greater good. You will discover camaraderie and purpose.

You will become a part of something bigger than yourselves: the Long Gray Line.

Scarlett Winter has always been an outsider, and not only because she’s a hardcore daredevil and born troublemaker—she has been hiding superhuman powers she doesn’t yet understand. Now she’s been recruited by a secret West Point unit for cadets with extraordinary abilities. Scarlett and her fellow students are learning to hone their skills, from telekinetic combat to running recon missions through strangers’ dreamscapes. At The Point, Scarlett discovers that she may be the most powerful cadet of all. With the power to control pure energy, she’s a human nuclear bomb—and she’s not sure she can control her powers much longer.

Even in this army of outsiders, Scarlett feels like a misfit all over again, but when a threat that endangers her fellow students arises from the school’s dark past, duty calls and Scarlett must make a choice between being herself and becoming something even greater: a hero.

Scarlett Winter is a young woman who lives life on the edge. When she is forced to attend West Point she doesn't know how she will survive but her alternative is prison, so she vows to do her best. A few weeks in though she hits her breaking point and is quickly whisked away to The Point, a secret underground school on the grounds of West Point that trains Posthumans who have special gifts.

Here she is to learn how to not only control her gift but to push it further making her stronger and more useful to the powers that be. Of course Scarlett struggles with this until her dreams start to talk to her. Helping her, teaching her.

While Scarlett attends school the outside world is being tormented by a Posthuman named Jagger. Jagger has the ability to charm anyone into doing his bidding. He also seems to be learning how to take on other peoples gifts.

The Point is charged with stopping Jagger but Jagger has skills that render most people useless. Can Scarlett learn enough to conquer Jagger but still remain intact?

Discover other books or products I like: https://www.amazon.com/shop/readinggrrl
Labels: John Dixon Posthumans The Point