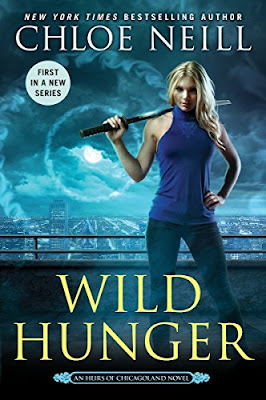 As the only vampire child ever born, some believed Elisa Sullivan had all the luck. But the magic that helped bring her into the world left her with a dark secret. Shifter Connor Keene, the only son of North American Central Pack Apex Gabriel Keene, is the only one she trusts with it. But she's a vampire and the daughter of a Master and a Sentinel, and he's prince of the Pack and its future king.

When the assassination of a diplomat brings old feuds to the fore again, Elisa and Connor must choose between love and family, between honor and obligation, before Chicago disappears forever.

I haven't finished the Chicagoland Vampire series but really enjoy it and didn't want to let the first book in this new series pass me by.  Even though I haven't finished the other series I was still able to catch on to what was happening in this book although it probably helped that I had some clue who some of the other players were.

This book focuses on Elisa Sullivan the only vampire child born of two vampires.  Most vampires are made not born.  However the magic that helped create her also resides inside her as a monster that is Elisa has been trying to control since she was a child. Connor is the son of the Apex or pack leader of the shifters.  Connor and Elisa have known each other since they were children but now they are both grown and their passion for each other has turned from a childish rivalry to grown up passion.

The Vampires of Europe have converged on Chicago for peace talks which go sideways when one of the oldest vampires is murdered and a shifter is charged with the crime. Connor and Elisa try to find evidence to prove him innocent and stumble onto a much larger conspiracy.

Politics, passion, and predjudice run rampant through these books just as they do in the real world. This book kept my interest and was a quick read, I look forward to what is happening between Connor and Elisa and also with Elisa and the monster living inside her, which I find to be an interesting story line particularly because it mimics something that happened to her mother back when she was first turned. Great start to a new series.