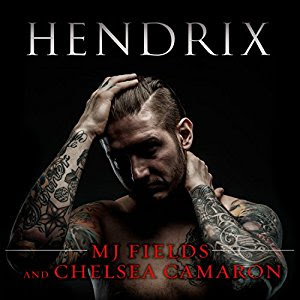 Hendrix Caldwell wants nothing more than to revitalize the family bar—and tear down every last reminder of his no-good father. But business isn’t the only thing on his mind. An explosive encounter with a stranger at a charity masquerade is just the distraction he craves, with no names and no strings attached. For Hendrix, sex is casual, and love is a four-letter word. His commitment is to his brothers, his bar, and his bike. So why can’t he stop thinking about the naughty Cinderella who rocked his world, then left him—and her panties—behind?

Olivia Hemmingway knows fairytales are for little girls. Drowning in debt and hiding a shameful secret, she won’t be saved by a knight in tattooed armor, no matter how mind-blowing their one-night stand may have been. Olivia never expects to meet her masked lover again. But when she takes a job at Hendrix Caldwell’s bar, her sexy new boss seems all too familiar. And once the lights go out and the music is turned up, the sparks between them burn hotter than ever.

Hendrix Caldwell and his brothers are stunningly hot, very loyal and when they find their one they don't shy away. All the Caldwell boys are still reeling from the death of their Mama.  They loved her dearly, hated the man who was their father and wished they could have protected her from his wrath.

When his brother cons him into going to a charity event for him Hendrix never knew that the little drunk vixon who rocked his world in a closet would turn out to be the best thing that ever happened to him.  Olivia Hemmingway is a worker, she doesn't like taking handouts and is determined to stand on her own.  One drunk night she got swept away and wound up having sex in a closet with a man she had just met.  So unlike her she is embarrassed but determined to put it behind her.  When she takes a job at a local bar she realizes that one of the hot sexy brothers that run and work there is her mystery closet man...but which one?

Hot, sexy and fun this is a great escape.