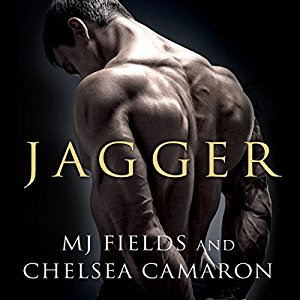 Jagger Caldwell is no one's hero. With a reputation for busting heads and breaking hearts on the underground MMA circuit, he lives for easy cash and easier women. But when he stumbles upon an all-too-familiar scene, painful memories awaken Jagger's sensitive side and compel him to act. As a kid, he stood by helplessly as his old man beat his mom. Now, Jagger won't let 17-year-old Tatiana Rand suffer the same fate. Nothing matters except saving her.

Tatiana is a prisoner in her own home, at the mercy of her violent father - until an unlikely savior bursts through her door and into her life. Six-feet-plus of tattooed muscle and raw power, Jagger is no prince charming, but Tatiana stopped believing in fairy tales long ago. Despite their differences in age and, well, everything else, the sexy bad boy sparks a fire that Tatiana never knew she had - and desires that only Jagger can quench.

The Caldwell brothers are stunningly hot, very loyal and when they find their One they don't shy away. All the Caldwell boys are still reeling from the death of their Mama.  They loved her dearly, hated the man who was their father and wished they could have protected her from his wrath.

I wasn't as enamored with this book as I was the first two in the series.  Oh Hendrix and Morrison are still a major part of the book and hot as hell but Jagger is more rough around the edges.

Baby Caldwell as his brothers call him makes his living fighting. He has been fighting his whole life. When he was old enough he would fight his father to protect his mother, and he hates to see a woman in distress. He can't stand the noises coming from his landlords apartment and finally breaks in and stops him from beating his daughter to death.  However that backfires and he winds up in jail.
But even that doesn't prevent him from wanting to protect the girl he found beaten in that apartment.

Tatiana is only 17, she will be 18 in a few days but she feels much much older.  She never leaves the house, doesn't have a life and gets beaten by her father on a regular basis until that one night when Jagger broke in and saved her. No one cared about her before that. One night after taking a beating so bad she realized she was in danger she runs to the only man she knows, the only one who has ever shown he cared.

My issue with this book is that while it doesn't belittle domestic violence even in the world of romance this jumped the shark for me a bit.  I doubt a girl who has been through this much trauma would be so quick to jump into anything with a man. Trust is hard earned and she is way too trusting. Don't get me wrong its a sexy book but I just felt Tatianna was a bit more of a caricature than the other Caldwell women. I think the Marked Men series did a better take on a woman coming out of abuse than this one did.