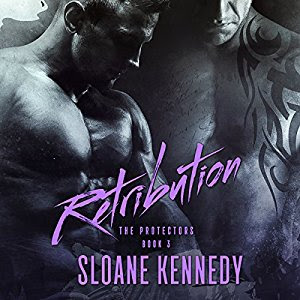 Ex Special Forces soldier Michael "Hawke" Hawkins has spent every day of the last ten years waiting for the moment he would get to watch the life fade from the eyes of the men who brutally murdered his wife, but when he finally gets the break he's been waiting for, the trail leads him to someone he wasn't expecting.

After nearly two years of running, 24-year-old Tate Travers has become an expert at hiding...until the day a dangerous stranger shows up looking for vengeance and threatens to destroy the fragile life Tate has managed to build for himself and his five-year-old son. Except the life Tate has been struggling to hold on to started unraveling long before Hawke showed up looking for the same men Tate has been running from...his own father and older brother.

Retribution - it's all Hawke has wanted since the day he held his wife's hand as she took her last breath. And he won't give that up for anything or anyone...not even the tormented young man trying to give his little boy a better life. Because Tate is the only one who can lead Hawke to the men he's been searching for. And if it means forcing the young man to confront the past that nearly destroyed him, then so be it.

Only the last thing Hawke expects to feel is something besides the hatred that has driven him. And he definitely never expected to feel it for a man.

But when it comes down to choosing between the unwanted feelings Tate stirs in him and the revenge he's finally close enough to taste, will Hawke be able to give up the one thing that has kept him going for a second chance at a future he gave up on ever having?

We met Hawke in the last book as he is guarding Seth and helping Ronan move beyond his issues to find love. This time Hawke has taken off to go after the men who killed his wife and unborn child but he doesn't find them, instead he finds Tate, the other son of the man who killed his wife.  Tate unlike his father and his brother is tender hearted.  He fled his fathers home with a young boy in tow raising him as his son.  Hawke tries to use him to get to his father but quickly discovers that his heart is not quite on board with treating Tate so harshly.

Not used to being attracted to men Hawke struggles with his attraction while also struggling with feelings of betraying his wife. Tate has been abused by his father and brother his whole life but has made a new life for himself with his son. When he finds out his son is sick his world starts falling apart until Hawke steps in and helps take some of the load.

Can these two men find love?

This book was more about self discovery than actual vengeance but its really well done.  Each book holds its own and really dives into the minds of these men.  Its not just about the physical its also very emotional.