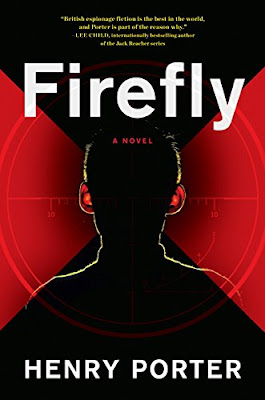 From the refugee camps of Greece to the mountains of Macedonia, a thirteen-year-old boy is making his way to Germany and to safety. Codenamed “Firefly,” he holds vital intelligence: unparalleled insight into a vicious ISIS terror cell, and details of their plans. But the terrorists are hot on his trail, determined he won’t live to pass on the information.


When MI6 become aware of Firefly and what he knows, the race is on to find him. Luc Samson, ex-MI6 agent and now private eye, finds himself recruited to the cause. Fluent in Arabic thanks to his Lebanese heritage and himself the product of an earlier era of violent civil war, Samson’s job is to find Firefly, win his trust, and get him to safety.

This book is a mad dash from Turkey to Greece, Macedonia and beyond while thirteen year old Naji tries to get to the EU so he can establish a safe place for his family. I think this book would have been better named had they actually used codename Firefly in the beginning of the book instead of halfway through.

Naji has in his possession valuable information on an ISIS cell that could help MI6 avoid an attack.
Resourceful and cunning I found myself cheering for this boy as he ran from terrorists and crossed borders undocumented giving MI6 and Samson a former Lebanese immigrant now a contractor for MI6 a run for his money. Samson's immigrant status and fluency in Arabic help him in trying to win Naji's trust.

Porter did a great job of showcasing what immigrants will go through in order to be safe and how there is now more than ever a distrust and fear of immigrants. This is a very timely book, has great intrigue and is well written.