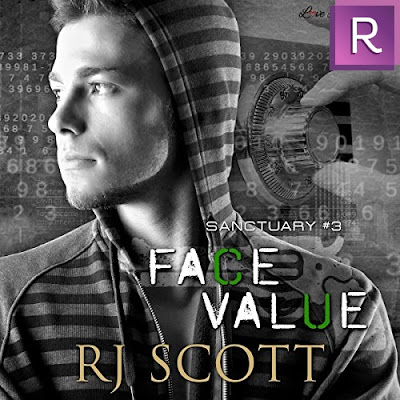 Beckett Jamieson discovers he is adopted when a lawyer hands him a letter from his mother on his 21st birthday. His real name is Robert Bullen, but the Bullen family is involved in criminal activity of the worst kind. He decides to bring them down but ends up badly beaten and temporarily blinded. A Sanctuary agent takes him to a safe house to heal.

Doctor Kayden Summers, Sanctuary operative, is not happy about being stuck in the middle of nowhere with an unconscious man. When Beckett wakes, the situation goes from bad to worse. Beckett does not trust him, is as determined as ever to find the evidence his mother hid, and on top of all that, Kayden finds himself attracted to the determined young man.

Can they overcome their issues and eliminate the threat from the Bullen brothers?

Book 3 - The mystery and investigation is the same through all the books as everyone is trying to take down a mob family.  Each book could be a stand alone and has its own romance but for better cohesion its probably better to read the whole thing. The books are short....the audio of the first four books are only 3 -3 1/2 hours each and the kindle books seem to range around 250 pages each.

Beckett was saved in the last book by Dale and Joseph, he is the son of one of the Bullens but was adopted at the age of 4 and just found out his connection to the infamous family. His mother has left clues on how to bring the family down.  Kayden is a Sanctuary doctor and operative. He is charged not only with helping Beckett heal but also with keeping him safe. But can the soft spoken doctor really protect him? I liked this installment, as Beckett tries to heal - I love Kaydens calm demeanor yet he is a total badass. Not as steamy as the book 1 but very well done and I'm enjoying the mystery plot.