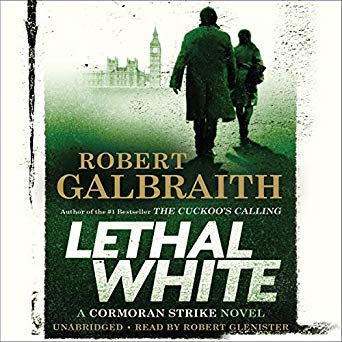 "I seen a kid killed... He strangled it, up by the horse."
When Billy, a troubled young man, comes to private eye Cormoran Strike's office to ask for his help investigating a crime he thinks he witnessed as a child, Strike is left deeply unsettled. While Billy is obviously mentally distressed, and cannot remember many concrete details, there is something sincere about him and his story. But before Strike can question him further, Billy bolts from his office in a panic.

Trying to get to the bottom of Billy's story, Strike and Robin Ellacott - once his assistant, now a partner in the agency - set off on a twisting trail that leads them through the backstreets of London, into a secretive inner sanctum within Parliament, and to a beautiful but sinister manor house deep in the countryside.

And during this labyrinthine investigation, Strike's own life is far from straightforward: his newfound fame as a private eye means he can no longer operate behind the scenes as he once did. Plus, his relationship with his former assistant is more fraught than it ever has been - Robin is now invaluable to Strike in the business, but their personal relationship is much, much trickier than that.

Picking up where the last novel ended. Strike makes it to Robin's wedding just in time to see her say I do, as he knocks over a huge flower display. They have a moment and Robin discovers something about her husband that puts their brand new marriage already on shaky ground.

This mystery is a lot more complex than the first ones in this series. With twists and turns and all of the tension between Strike and Robin that I loved in the first few books. However Robin is now married and Strike is trying his best to keep himself out of her personal life.

The story alternates between two crimes: in one, a mentally ill man reports seeing a child murdered when he was himself young. Then he gets hired by Jasper Chiswell, the Ministry of Culture who hires Strike to look into blackmail threats. During his investigation Strike finds that the mentally ill man's brother is one of the people protesting the cost of London hosting the Olympic Games and has ties to the blackmail, tying the two cases together in Strikes mind.

With lots of symbolism and Robins help Strike undertakes another explosive case.