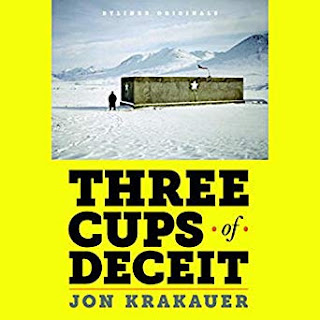 Greg Mortenson has built a global reputation as a selfless humanitarian and children's crusader, and he's been nominated for the Nobel Peace Prize. He is also not what he appears to be. As acclaimed author Jon Krakauer discovered, Mortenson has not only fabricated substantial parts of his best-selling books Three Cups of Tea and Stones into Schools, but has also misused millions of dollars donated by unsuspecting admirers like Krakauer himself.
This is the tragic tale of good intentions gone very wrong.

100% of Jon Krakauer's proceeds from the sale of Three Cups of Deceit will be donated to the "Stop Girl Trafficking" project at the American Himalayan Foundation (www.himalayan-foundation.org/live/project/stopgirltrafficking).

I was a huge fan of Three Cups of Tea so to hear about the falsehoods, and deceit included within the book broke my heart and while Greg Mortenson still won't come clean about some of it many of his schools sit empty and unusable. While CAI build schools they didn't find the people to staff them. This is not to say that CAI (Mortenson's non-profit) haven't done good works they have, and Krakauer highlights these but Mortenson's continuing lies and deceit have undermined the organization.

With interviews from former board members and people Mortenson supposedly knew in Pakastan Krakauer uncovers lies that made no sense to the mission but helped make the books more adventurous. As reported in a New Yorker Article by Peter Hessler "According to Krakauer, in 2009, C.A.I. spent 1.7 million dollars to promote Mortenson’s books, taking out full-page ads in publications like the New York Times, and chartering private planes for him to attend speaking events. The non-profit purchased tens of thousands of copies of “Three Cups of Tea” and “From Stones Into Schools” from commercial retailers, which meant that royalties would be paid to Mortenson, who doesn’t donate such proceeds to C.A.I."  It seemed that Mortenson was more interested in selling books than in his supposed real mission of education.

Thankfully in 2016 Mortenson stepped down from CAI and CAI has begun to shift its focus from just building schools to education. Although on look at Charity Navigator still shows Mortenson drawing a significant salary from the organization but I'm unsure as to why or what his role in it still is which gives me pause and still leaves me with a weird taste in my mouth.

Unlike Mortenson, 100% of Jon Krakauer's proceeds from the sale of Three Cups of Deceit will be donated to the "Stop Girl Trafficking" project at the American Himalayan Foundation.