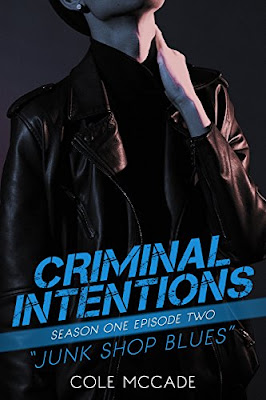 A murdered night club mogul unlocks a web of infidelity and deceit. The most likely suspect? The daughter of the richest family in Baltimore, if only Detectives Malcolm Khalaji and Seong-Jae Yoon can piece the evidence together. The clues just aren't lining up—but Malcolm can't tell if he's missing a piece of the puzzle or completely missing the mark. The McAllister case still haunts him. So many dead. So many he couldn't save. It's throwing him off his game. And the only one who really understands is his strange, coldly aloof partner. A partner he can never see the same way, after a moment of intimacy that haunts him as much as the voices of the dead. Seong-Jae Yoon is struggling in his own way. He can't solve the case when he can't trust Malcolm, and he can't trust Malcolm when the grizzled old wolf is growing increasingly erratic, increasingly dangerous. What disturbs Seong-Jae is how much he needs to trust Malcolm. He doesn't get that close. He doesn't get that involved. But he may have no choice, if they want to stop a powerful killer from slipping away.

Icy. Willful. Detached. Stubborn. Seong-Jae is all that and more, impossible to work with and headstrong enough to get them both killed…if they don’t kill each other first. Foxlike and sullen, Seong-Jae’s disdainful beauty conceals a smoldering and ferocious temper, and as he and Malcolm clash the sparks between them build until neither can tell the difference between loathing and desire.

But as bodies pile up at their feet a string of strange, seemingly unrelated murders takes a bizarre turn, leading them deeper and deeper into Baltimore’s criminal underworld. Every death carries a dangerous message, another in a trail of breadcrumbs that can only end in blood.

Malcolm and Seong-Jae must combine their wits against an unseen killer and trace the unsettling murders to their source. Together, they’ll descend the darkest pathways of a twisted mind—and discover just how deep the rabbit hole goes. And if they can’t learn to trust each other?

Neither will make it out alive.

The first episode introduced us to Malcolm and Seong-Jae. They were thrown together as unwilling partners but have formed a good team but underlying attraction is making it hard to concentrate on the case and the fact that Seong-Jae refuses to get his own desk leave Malcolm on edge. The last case they worked on still haunts both of them but Malcolm is stubbornly refusing to go to his required therapy appointment. Seong-Jae isn't used to trusting anyone but he finds he wants to trust Malcolm despite Malcolm's erratic behavior on this new case.

This is a really good series. I was pleasantly surprised to find it. The mysteries keep your interest and the chemistry keeps you on edge waiting for the inevitable. Can't wait to read episode 3