Book Review: A Gathering of Secrets (a Kate Burkholder Novel) by Linda Castillo 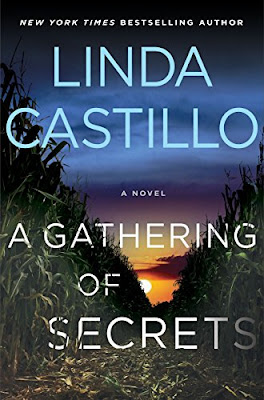 When a historic barn burns to the ground in the middle of the night, Chief of Police Kate Burkholder is called in to investigate. At first, it looks like an accident, but when the body of eighteen-year-old Daniel Gingerich is found inside—burned alive—Kate suspects murder. Who would want a well-liked, hardworking young Amish man dead? Kate delves into the investigation only to find herself stonewalled by the community to which she once belonged. Is their silence a result of the Amish tenet of separation? Or is this peaceful and deeply religious community conspiring to hide a truth no one wants to talk about? Kate doubles down only to discover a plethora of secrets and a chilling series of crimes that shatters everything she thought she knew about her Amish roots—and herself.

As Kate wades through a sea of suspects, she’s confronted by her own violent past and an unthinkable possibility.

I wouldn't consider this a standalone book, that being said I have read the entire series so far and am a huge fan of them. However, this was not my favorite.  The mystery is good and there are a lot of twists and turns and they do a pretty good job of holding on to who committed the actual arson till the end but there was just something really troubling about this book. It was definitely darker than some of the others and the secrets and ways in which the Amish deal with things that happen in this novel really made me mad which may have been why I had so much trouble with it.

I do thoroughly enjoy these books, I love the way Kate is separate but still very much admires so much of the Amish culture, the simple ways. I also love the relationship she has with Tomessetti her FBI boyfriend and though he is fighting his own demons he respects Kate and knows what she needs so much of the time. Overall I really like this series and I'm not disappointed I read this but it just didn't reel me in the way some of the others have.