Book Review: The Tattooist of Auschwitz by Heather Morris 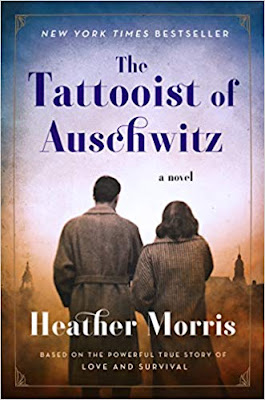 In April 1942, Lale Sokolov, a Slovakian Jew, is forcibly transported to the concentration camps at Auschwitz-Birkenau. When his captors discover that he speaks several languages, he is put to work as a Tätowierer (the German word for tattooist), tasked with permanently marking his fellow prisoners.

Imprisoned for over two and a half years, Lale witnesses horrific atrocities and barbarism—but also incredible acts of bravery and compassion. Risking his own life, he uses his privileged position to exchange jewels and money from murdered Jews for food to keep his fellow prisoners alive.

One day in July 1942, Lale, prisoner 32407, comforts a trembling young woman waiting in line to have the number 34902 tattooed onto her arm. Her name is Gita, and in that first encounter, Lale vows to somehow survive the camp and marry her.

Based on the true life experiences this is a story of survival and love in truly the worst circumstances. Some of this was hard to read and I had to put the book down a few times and do something else but Lale's story was so inspiring that I had to keep reading.  The afterward written by Lale and Gerta's son was beautiful. His parents were truly inspiring and somehow kept their hope and love alive through years spent seeing so many die.

It wasn't just Jews who died in these camps as this book shows it was Gypsy's, political prisoners, and many others. The experiments done to many were horrific and often disfiguring its amazing that anyone survived and that those who did were able to for the most part pick up the pieces and live full lives. This is a book that inspires you to live.  If anyone can survive this type of trauma and still retain a sense of humor and a zeal for life than I can certainly move past petty annoyances and thrive.

Discover other books or products I like: https://www.amazon.com/shop/readinggrrl
Labels: auschwitz Greta Heather Morris holocaust Lale Sokolov The Tattooist of Auschwitz