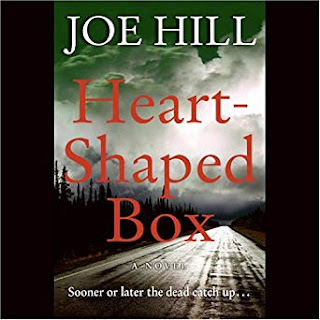 Judas Coyne is a collector of the macabre: a cookbook for cannibals...a used hangman's noose...a snuff film. An aging death-metal rock god, his taste for the unnatural is widely known. But nothing he possesses is as unlikely or as dreadful as his latest discovery, a thing so terrible-strange, Jude can't help but reach for his wallet.


I will sell my stepfather's ghost to the highest bidder.

For a thousand dollars, Jude will become the proud owner of a dead man's suit, said to be haunted by a restless spirit. He isn't afraid. He has spent a lifetime coping with ghosts: of an abusive father, of the lovers he callously abandoned, of the bandmates he betrayed. What's one more? But what UPS delivers to his door in a black heart-shaped box is no imaginary or metaphorical ghost. It's the real thing.

And suddenly the suit's previous owner is everywhere: behind the bedroom door...seated in Jude's restored vintage Mustang...standing outside his window...staring out from his widescreen TV. Waiting - with a gleaming razor blade on a chain dangling from one hand.

Creepy and spine chilling I had a hard time pausing this book.

Judas doesn't understand his attraction to the macabre and when someone auctions off a ghost he can't help himself but to buy it. Of course the whole thing was a set up and now Jude and his girlfriend are battling a ghost who is hellbent on killing them.

Fast paced, and spooky this book catches you and keeps you going.  As Judas and Marybeth (aka Georgia) take to the road to confront the woman who sold him the ghost, Judas starts to evaluate his life. Marybeth and Judas start to share more of their past and learn more about each other and as they try to survive they get closer. So for all its dark creepiness this book is also about redemption and love. Joe Hill definitely has established himself as a leader in horror writing on par with Stephen King. There were many twists and turns that I didn't see coming and the ending was not what I expected but in a good way.