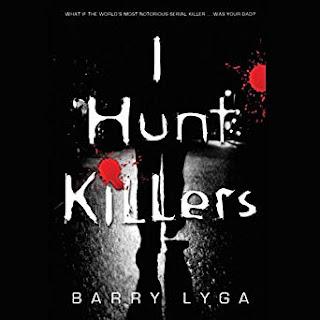 Except for the body.

Jazz is a likable teenager. A charmer, some might say.

But he's also the son of the world's most infamous serial killer, and for Dear Old Dad, "Take Your Son to Work Day" was year-round. Jazz has witnessed crime scenes the way cops wish they could--from the criminals' point of view.

And now, even though Dad has been in jail for years, bodies are piling up in the sleepy town of Lobo's Nod. Again.

In an effort to prove murder doesn't run in the family, Jazz joins the police in the hunt for this new serial killer. But Jazz has a secret--could he be more like his father than anyone knows?

From acclaimed author Barry Lyga comes a riveting thriller about a teenager trying to control his own destiny in the face of overwhelming odds.

My daughter has been pressuring me to read this for years and I just kept putting it off.  When I found a free audio version of it on Scribd, the time had come.  I was instantly hooked. Jazz was raised by the country's most notorious serial killer Billy Dent. Being raised in this unconventional way has given Jazz a unique perspective into serial killers.  He knows how to manipulate people, and has recurring dreams of death and killing. Jazz's biggest fear is turning into his father so he tries to use his talents to help the police solve crimes.

Jazz, his girlfriend Connie and his hemophiliac best friend Howie are wonderful characters. Well developed and funny. Where Jazz is dark, Connie and Howie balance his morose outlook on life.  Howie with his dark sense of humor about his condition and Connie who doesn't let Jazz slip into his fear.

I really enjoyed this book and can't wait to get my hands on the next one in the series. I read on the authors website that he would like to write a new series featuring the same cast of characters set about 5 or so years later. I really hope that comes to fruition.