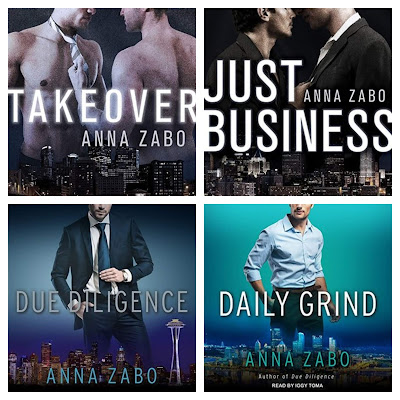 Takeover: Michael Sebastian thought that Curacao would be the perfect place to have a little fun in the sun - and between the sheets. So far no one has struck his interest - until Sam Anderson walks into the bar. With one look at his tense body and expensive suit, Michael knows that this is a man in need of release. And Michael is more than willing to lend a hand.


Shattered by the most intense sex he's ever had, Sam has to face the facts - one night with a handsome, dominating stranger is all he gets before returning to the closet he's been suffocating in for years. But when Sam starts his new job as the CEO of a failing technology company, he discovers that Michael is one of his new employees.
While Michael is desperate for another night with Sam, he knows he shouldn't get involved with his boss, let alone another man who can't accept who he is. But as they're forced to work together to save the company, the desire sparking between them becomes impossible to ignore.

Just Business: Justin White may not look like an up-and-coming corporate superstar, but his new boss knows that he has the smarts, grit, and determination to succeed. Now he just has to convince his company's CFO, Eli Ovadia. Unfortunately, Justin can't seem to keep his cool around the domineering Eli, and soon he finds himself taking their heat from the boardroom into the bedroom.

Still haunted by a tragic accident that left him with a wounded leg and broken heart, Eli has a need to be in control. But his desire for Justin makes him want to lose that control and push them both far beyond their limits. Will his need to dominate Justin drive him away, or will Eli find a way to be the man he needs for both of them?

Due Diligence: After Fazil Kurt breaks up with his girlfriend, a business trip to Seattle offers some much-needed time away. Sent by S. R. Anderson Consulting, Fazil is there to help audit Singularity Storage, a company they are trying to save. His first discovery is intriguing to say the least: One of Singularity's engineers is Todd Douglas, Fazil's first love.


He knows better than to get personally involved on a job like this. Back in high school, Todd broke Fazil's heart more times than he could count, but both men have grown so much since then - and Fazil never could say no to Todd....

Daily Grind: Brian Keppler, owner of Ground N'At, the coffee shop beneath SR Anderson Consulting, doesn't have time for a relationship. His most recent girlfriend broke up with him because he'd become married to his shop, which is falling apart without his favorite barista, Justin. As he struggles to stay afloat, the arrival of handsome British high-tech whiz Robert Ancroft becomes another complication. Rob quickly becomes a fixture at the shop with his sharp wit and easy charm, and Brian soon finds himself looking forward more and more to Rob's visits - to the point where his heart skips a beat when he walks in. But will Brian be able to come to terms with his previously unexplored sexual identity and find happiness now that he has a chance?

I really enjoyed this series and really love Iggy Toma's narration.  He is excellent at different accents and draws you in with his voice. Out of all 4 of these I would say that Due Diligence is my least favorite just because I didn't feel the sparks as much as in the other books. Although I did like that it dealt with racism, antisemitism, and lgbt discrimination. All of the characters intersect through the books which is always fun, like a familiar friend showing up at a party unexpectedly.