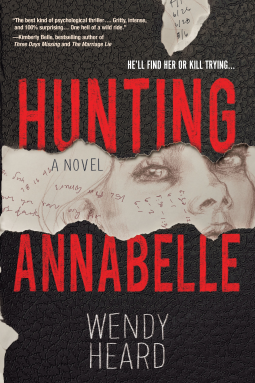 Sean Suh is done with killing. After serving three years in a psychiatric prison, he’s determined to stay away from temptation. But he can’t resist Annabelle—beautiful, confident, incandescent Annabelle—who alone can see past the monster to the man inside. The man he’s desperately trying to be.

Sean is sure she’s been kidnapped—he witnessed her being taken firsthand—but the police are convinced that Sean himself is at the center of this crime. And he must admit, his illness has caused him to “lose time” before. What if there’s more to what happened than he’s able to remember?

Though haunted by the fear that it might be better for Annabelle if he never finds her, Sean can’t bring himself to let go of her without a fight. To save her, he’ll have to do more than confront his own demons… He’ll have to let them loose.

Set in the 80's this is a creepy dark love story that reminds me a bit of Dexter. Heard is a new author and if this is her debut look out for more creepy fun to come. Sean spends most of his days at Four Corners sketching and wandering around. Diagnosed with Schizophrenia he is on a lot of medication that leave him missing time and in a haze.  The drugs are supposed to stop hallucinations and curb his desire to hurt people but Sean can still see colors swirling around other people and his desire to hurt hasn't gone away.

Annabelle is a med student looking for a place to scatter her grandmothers ashes. She takes a liking to Sean and then suddenly she disappears, her screams echoing in Seans head.  The police think he had something to do with it and his missing time and violent past don't help his insistence that he is innocent.  Determined to find her Sean goes on a quest to discover what really happened to Annabelle. While experiencing symptoms of withdraw from his medication, he starts to feel more clear headed and more like himself, but is that a good thing or a bad thing? What Sean finds is not what I expected and the ending almost felt like a cliff hanger.  I could totally see this turning into a series.

This is a fast paced thriller that leads you down twists and turns and has you routing for our flawed hero. Did he hurt Annabelle or is she really missing and if so who took her? Who are the bad guys in this book? The cops who set their sites on Sean because of his past, the mother who seems to want to keep her son medicated and locked away, or the well hidden predators that lurk and prey on innocents or is it Sean? Heard keeps you on the edge of your seat turning page after page just so you can find out the answers. Excellent.