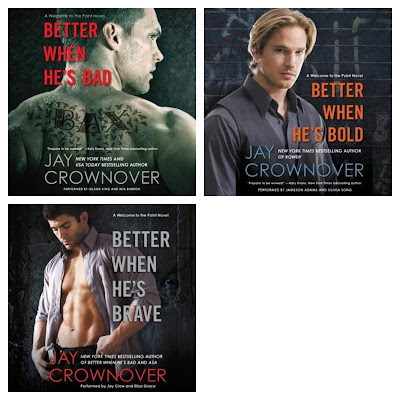 This series crosses over with The Breaking Point Series

Welcome to the Point...
There's a difference between a bad boy and a boy who's bad.... Meet Shane Baxter.
Sexy, dark, and dangerous, Bax isn't just from the wrong side of the tracks, he is the wrong side of the tracks. A criminal, a thug, and a brawler, he was the master of bad choices, until one such choice landed him in prison for five years. Now Bax is out and looking for answers, and he doesn't care what he has to do or who he has to hurt to get them. But there's a new player in the game, and she's much too innocent, much too soft...and standing directly in his way.
Dovie Pryce knows all about living a hard life and the tough choices that come with it. She's always tried to be good, tried to help others, and tried not to let the darkness pull her down. But the streets are fighting back, things have gone from bad to worse, and the only person who can help her is the scariest, sexiest, most complicated ex-con the Point has ever produced.
Bax terrifies her, awakening feelings she never thought she'd have for a guy like him. But it doesn't take Dovie long to realize...some boys are just better when they're bad.

Some men are just better when they're bold.
Welcome to the Point...
In a dark and broken kingdom, a ruler has to be fearless to control the streets and the ruthless people who run them.
Race Hartman is just bold enough, just smart enough, and just lost enough to wear the crown. Places like the Point will always have bad things and bad people, but the man in control of all that badness can minimize the devastation. Race has a plan, but can he prevent total annihilation without destroying himself? Brysen Carter has always seen her best friend's brother for what he is too pretty, too smooth, and way too dangerous to touch. Basking in Race's golden glow is very tempting, but Brysen knows she'd eventually get burned.
When she starts receiving threatening texts and someone tries to take her out in the parking lot, the only person interested in keeping her safe is the one man she can't allow herself to have.
Sometimes being bold is the only way to stay alive. But can she let Race save her life... if it means losing herself to him?

Some men are just better when they're brave.
Titus King sees the world in black and white, right and wrong. That is why as a teenager he left behind the only family he'd ever known to make a better life for himself. Now a police detective in one of the worst cities in the country, he can't deny his life has turned into a million different shades of gray.
The new criminal element in the Point has brought vengeance and destruction right to Titus' front door, and the difference between right and wrong is nothing compared to keeping those he loves alive. To add to his already strained moral compass, the beautiful and mysterious Reeve Black has made her way back to town, and she might be as dangerous to Titus as the guy trying to destroy the Point. Titus needs her in more ways than one.
Reeve knows all about how ruthless this new threat to destroy the Point can be. Instead of running away, she wants to help. She has a lot to repent for, and saving the city, plus the hot cop that she hasn't been able to forget, might just be the only way she can finally find some inner peace.
With an entire city poised on the brink of war, Titus and Reeve stand in the crossfire - and it will take two brave souls to fight for the ultimate love.

The point is a broken place, the police try to keep the peace but the criminal underworld runs the point. The kingpin of the Point has been bringing it to its knees with fights, prostitution, illegal betting and loans. Bax who just got out of jail wants to change that but he also wants answers. His brother Titus King is a cop in the point who wants to make sure Bax doesn't fall off the straight and narrow and wind up back in jail. Bax's best friend Race is missing and his sister Dovie is being harrassed by the head of the point as he searches for her brother. This is not a fuzzy above the law series.  All of these people have to bend rules and play by their own games in order to survive in the point but while they are bad they are are also very protective and loyal. This was an interesting series. Not sure I liked it as much as Crownovers Marked Men series but they are still a good read with a dark undertone.