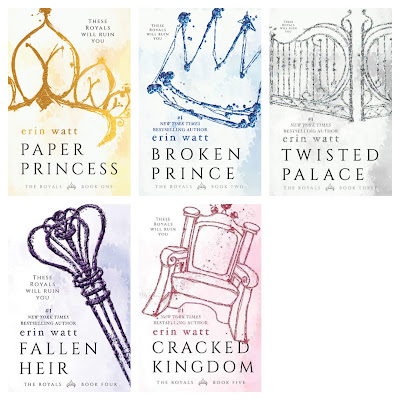 From strip clubs and truck stops to southern coast mansions and prep schools, one girl tries to stay true to herself.
These Royals will ruin you...
Ella Harper is a survivor - a pragmatic optimist. She's spent her whole life moving from town to town with her flighty mother, struggling to make ends meet and believing that someday she'll climb out of the gutter. After her mother's death, Ella is truly alone. Until Callum Royal appears, plucking Ella out of poverty and tossing her into his posh mansion among his five sons who all hate her. Each Royal boy is more magnetic than the last, but none as captivating as Reed Royal, the boy who is determined to send her back to the slums she came from.
Reed doesn't want her. He says she doesn't belong with the Royals. He might be right. Wealth. Excess. Deception. It's like nothing Ella has ever experienced, and if she's going to survive her time in the Royal palace, she'll need to learn to issue her own Royal decrees.

These Royals will ruin you...From wharf fights and school brawls to crumbling lives inside glittery mansions, one guy tries to save himself.
Reed Royal has it all - looks, status, money. The girls at his elite prep school line up to date him, the guys want to be him, but Reed never gave a damn about anyone but his family until Ella Harper walked into his life.
What started off as burning resentment and the need to make his father's new ward suffer turned into something else entirely - keep Ella close. Keep Ella safe. But when one foolish mistake drives her out of Reed's arms and brings chaos to the Royal household, Reed's entire world begins to fall apart around him.
Ella doesn't want him anymore. She says they'll only destroy each other.
She might be right.
Secrets. Betrayal. Enemies. It's like nothing Reed has ever dealt with before, and if he's going to win back his princess, he'll need to prove himself Royally worthy.

The hotly anticipated conclusion to the Royals series begun in the number-one New York Times best-selling novels Paper Princess and Broken Prince.
These Royals will ruin you....
From mortal enemies to unexpected allies, two teenagers try to protect everything that matters most.
Ella Harper has met every challenge that life has thrown her way. She's tough, resilient, and willing to do whatever it takes to defend the people she loves, but the challenge of a long-lost father and a boyfriend whose life is on the line might be too much for even Ella to overcome.
Reed Royal has a quick temper and even faster fists. But his tendency to meet every obstacle with violence has finally caught up with him. If he wants to save himself and the girl he loves, he'll need to rise above his tortured past and tarnished reputation.
No one believes Ella can survive the Royals. Everyone is sure Reed will destroy them all. They may be right.
With everything and everyone conspiring to keep them apart, Ella and Reed must find a way to beat the law, save their families, and unravel all the secrets in their Twisted Palace.

Easton Royal has it all: looks, money, intelligence. His goal in life is to have as much fun as possible. He never thinks about the consequences because he doesn't have to.
Until Hartley Wright appears, shaking up his easy life. She's the one girl who's said no, despite being attracted to him. Easton can't figure her out and that makes her all the more irresistible.
Hartley doesn't want him. She says he needs to grow up.
She might be right.
Rivals. Rules. Regrets. For the first time in Easton's life, wearing a Royal crown isn't enough. He's about to learn that the higher you start, the harder you fall.

These Royals will ruin you.
Ever since Hartley Wright met Easton Royal, her life hasn't been the same. There are enemies behind every corner and dangers beyond each door. When tragedy strikes and steals her memories, she can't trust anyone, not even the blue-eyed boy who promises her everything will be all right.
While Hartley's memory is full of gaps, her instincts tell her Easton is dangerous. She doesn't know if he's the snake in the garden or her chance at salvation. The chaos he brings wherever he goes is too much to handle, the intense feelings he evokes are too confusing to unravel.
Easton wants her to remember. Hartley thinks it's better to forget. She might be right. Tragedy. Treachery. Trust. Hartley has to face the facts - in this world, you can't escape the Royals. Either you live by their rules or you die by them.

The first 3 books in this series focus on Ella and Reed, the 2nd two are about Reed's brother Easton. This is a modern day fairy tale. Ella has been doing anything she can to stay out of foster care since her mother died.  Then Callum Royal shows up. Callum sweeps Ella into a fairy tale land of money, where rules don't really matter and drama runs high.

I really liked this series, so far (I'm sure there will be more). I've never seen Pretty Little Liars but from what I've seen of the commercials it has that type of feel.  It also reminds me of the show Elite on Netflix.  Obnoxiously rich kids who think the social status of high school is the most important thing in the world. The Royal family is broken.  After their mother committed suicide the boys have been lost and so has their father.  Ella seems to be the glue they need to bring them back together as a family but the in fighting and the manipulations of the people around them make happily ever after not so easy.

This is a lot of drama but they are really fun books that keep you entertained.