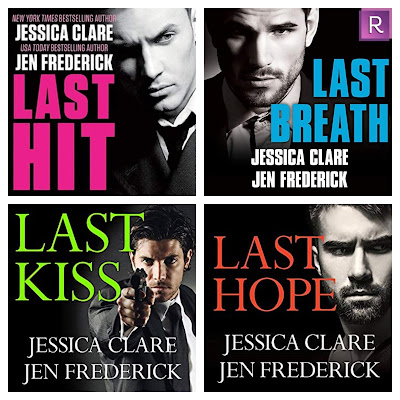 Last Hit:
Nikolai: I have been a contract killer since I was a boy. For years I savored the fear caused by my name, the trembling at the sight of my tattoos. The stars on my knees, the marks on my fingers, the dagger in my neck, all bespoke of danger. If you saw my eyes, it was the last vision you’d have. I have ever been the hunter, never the prey. With her, I am the mark and I am ready to lie down and let her capture me. Opening my small scarred heart to her brings out my enemies. I will carry out one last hit, but if they hurt her, I will bring the world down around their ears.

Daisy: I've been sheltered from the outside world all my life. Home-schooled and farm-raised, I’m so naive that my best friend calls me Pollyanna. I like to believe the best in people. Nikolai is part of this new life, and he’s terrifying to me. Not because his eyes are cold or my friend warns me away from him, but because he’s the only man that has ever seen the real me beneath the awkwardness. With him, my heart is at risk... and also, my life.

Last Breath:
Regan: I never really knew what misery was until the day I was kidnapped and sold for being in the wrong place at the wrong time. Two months later, I'm at a brothel in Rio when I meet Daniel Hays. He says he's here to save me, but can I trust him? All I know of him are his sarcastic retorts and his tendency to solve every dispute with his gun. He's also the only safe thing in my world, and I know it's wrong to fall in love with him, but I can't seem to help myself. He says he’ll protect me until his last breath but I don’t know if I should believe him or even if I can.

Daniel: For the last eighteen months, I’ve had one goal: to find my kidnapped sister. I’ve left the Army, turned paid hit man, and have befriended criminals all across the globe. In every brothel I raid or every human trafficking truck I stop, her face is the one I’m desperate to see. In Rio, I find Regan Porter, bruised but not broken and still sane despite her weeks in hell. I should leave her behind or send her home because the last thing either of us needs is to get involved. But with every passing minute, I find I can’t let her go.

Last Kiss:
Naomi: When I was kidnapped I thought only of survival. I don’t thrive well in chaos. That’s why I gave my captors exactly what they wanted: my skill with computers. Making millions for a crime lord who kept me imprisoned in his basement compound kept my family safe. When he was taken out, I thought my ticket to freedom had arrived. Wrong. I traded one keeper for another. This time I’m in the hands of a scarred, dark, demanding Russian who happens to be the head of the Bratva, a Russian crime organization. He wants my brain and my body. I’d be lying if I said I wasn’t intrigued, but I can’t be a prisoner forever...no matter how good he makes me feel.

Vasily: At a young age, I was taught that a man without power is a puppet for all. I’ve clawed—and killed—my way to the top so that it is my heel on their necks. But to unify the fractured organization into an undefeatable machine, I need a technological genius to help me steal one particular artifact. That she is breathtaking, determined, and vulnerable is making her more dangerous than all of my enemies combined. But only I can keep her safe from the world that she now inhabits. Soon, I must choose between Naomi and Bratva law. But with every day that passes, this becomes a more impossible choice.

Last Hope:
Mendoza: I grew up in the slums and lost everything I loved to poverty, illness, and death. I had only one skill to leverage myself out of my circumstances—violence. Being hired out as a mercenary hitman brought me money and built an empire. But all that I've fought for is in jeopardy. My next job: Steal secret information that could bring down world governments. Find my target. Destroy it. But then, I meet her.

Ava: Karma hates me. When my best friend Rose is kidnapped, I have no choice but to take a job as a mule for a pair of criminals intent on selling top-secret information to the highest bidder. I should have known that bad luck tends to cling, because the plane I'm on goes down. That I survived a crash-landing was a miracle. And so was being rescued by Rafe Mendoza—hot, sexy, dangerous. The thing is, he wants the information that I need to free Rose. I can't let him have it, but I need his help. And I need to fight this crazy attraction for this mercenary with hungry eyes. Rose is depending on me, and I won't let her down, no matter how appealing Rafe is.

Great series, I loved Last Kiss, Naomi is on the Autism spectrum and her brutal honesty and need for direct communication often had me laughing out loud. I think out of the whole series this was my favorite. All of these book are hot steamy and filled with rough men who fall hard when they find the right women.  The women are tough and while they may be in horrible circumstances they are fighters.  Great escape from the holiday crazy. I also love the narration from Iggy Toma.