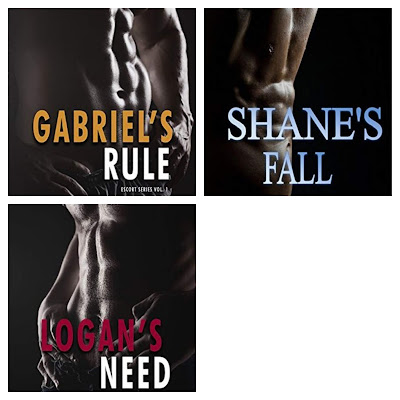 This series crosses over with Barretti Security Series, The Finders Series, and The Protectors Series so for the most enjoyment, they should be read in order, but it is not required. You can find the correct reading order at the beginning of each book. I've also bundled all my series in the correct reading order under the title of A Family Chosen: The Protectors and Barrettis.

Gabriel's Rule:
After nearly ten years of moonlighting as a professional escort, Gabriel Maddox is good at giving women the forbidden pleasures they crave. They don't need to know that something inside of him dies a little each time he does it or that his desperate need for cash is the only reason he can't walk away. They just need to know that to get what they want, they have to play by his rules.

Riley Sinclair is starting over. She's left dry, dusty Texas and her ultra conservative, fanatically religious parents and cheating, mean-spirited fiancé behind for a new life in Seattle. But one look at her stunningly gorgeous new neighbor Gabe brings back all the insecurities she's trying to escape.

Gabe can only offer Riley pleasure but when she discovers that his perfect outside hides something terribly broken on the inside, will she risk her heart to give him what he needs?

>Trigger Warning: To access the triggers in this book, use the "Look Inside" feature or download the sample and scroll to the page. Reading triggers may cause spoilers.

Shane's Fall:
"You know what it's like, don't you? When the pain goes so deep inside that you need to try and find a way to let some of it out? But you don't actually let it out, do you? You become someone else - someone who doesn't hurt, someone who doesn't have to hide." -Savannah

Shane Matthews loves women, sex and money and as a professional escort, he gets to have all three whenever he wants. So what if he's not the same, naive person he was when he started - it's what he's good at. But life is catching up with Shane and he's losing the battle against an addiction that has haunted him for years. He's managed to keep the truth from his friends and family, but the pressure of pretending to be perfect may just be too much.

Savannah Bradshaw needs to get her life back under control before the fear and pain consume her. A brutal assault from someone she trusted has left her fearing sex and men and the dangerous method she uses to cope is stealing her life. She needs Shane to show her how to escape the pain, but as his best friend's little sister, he's keeping her at arm's length.

Savannah's desperate plan to bring them together for one night has Shane agreeing to show her the pleasure her body can experience, but she has to agree to his terms. Giving her what she needs should be easy, as long as he doesn't do something stupid like fall in love with her...

Trigger Warning: To access the trigger warnings for this book, utilize the "Look Inside" feature or download the sample and scroll to the appropriate page. Reading the triggers may cause spoilers.
Can be read as a stand-alone story - no cliffhangers.

Logan's Need:
After Logan Bradshaw's dreams go up in smoke, he's left broken and haunted by a cruel betrayal from his former business partner, a man he once thought of as a friend. His life as a professional escort helped pay for his future once, so maybe a few more jobs can give him back what he's lost. And if that means being a third for one night for a wealthy couple living out a ménage fantasy, then so be it. It might just be the final payout he needs to get his life back on track.

Dominic Barretti has everything money can buy, but it can't save his beautiful young wife as cancer steals her away from him. He also can't deny her one last request - a ménage encounter with another man. It's the perfect excuse to meet the man who's been haunting his dreams. On paper, Logan is the perfect choice to give his wife what she needs, but he doesn't expect his own fierce desires to flare up when the young man enters their lives.

Dom and Logan don't know it, but Sylvie Barretti has decided to play matchmaker from beyond the grave. Unfortunately, getting two broken men to find each other makes dying seem like the easy part.

Logan can't deny his attraction to Dom, but the surprise desire for another man has left him reeling and questioning everything he's ever known about himself. But when a threat from the past surfaces, will Logan be able to let go of the life he knew and embrace the one he needs?

Really great series. All of the books in this series except for Logan's Need are M/F romance, Logan's Need is M/M romance. Gabriel, Shane and Logan are all escorts, each fell into it for the money and for their own reasons. Gabriel hates it, Shane has always enjoyed it until recently and Logan finds it to be a way to keep him and his sister together since their parents died. Each has their own demons, Gabriel has a junkie for a mother, Shane overbearing parents and a dead sibling, Logan does everything for everyone else and not for himself and when he finds someone who makes him want more it scares the hell out of him because it doesn't come in the package he was expecting.

I love Kennedy's series, and this one is fantastic too. These can be read as stand alones but they are better when you read them either in the order of the series or the order the author has given on her website or in her books. All of her series seem to cross over so you find characters popping up in one series that you knew from another which I love. It also makes it seem like they never left and in each new book they are a little more progressed in their lives.